11 Facts About the Coca-Cola Bottle

11 Facts About the Coca-Cola Bottle 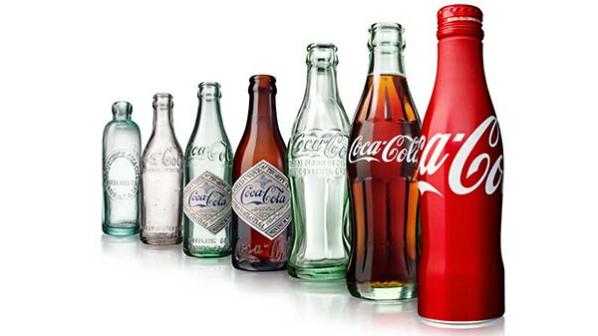 1915
To thwart the efforts of copycats, the now-famous contour bottle for Coca-Cola was patented in 1915 by the Root Glass Company in Terre Haute, Indiana, USA. Until the development of the contour bottle – so distinctive it could be recognised in the dark or lying broken on the ground – Coca-Cola bottlers used straight-sided bottles in a wide variety of shapes, sizes and colours.

1923
Did you know that the six-pack carrier, though common today, was an innovation developed by the Coca-Cola system in 1923? It was created to encourage people to take contour bottles of Coca-Cola home and drink it more often with the expanded availability of home refrigeration.

25 December, 1923
The patent on the contour (also called the hobbleskirt) bottle was renewed for first time in 1923. This particular mould design for the bottle was patented in the U.S. Patent Office and released in the publication of that office, Official Gazette, on 25 December, 1923. This date was a coincidence, in that the publication was issued every Tuesday, and in 1923 Christmas Day fell on Tuesday. All contour bottles produced between late 1923 and 1937 carried the Christmas day patent imprint. Due to the date, this bottle is referred to as the "Christmas Bottle."

1928
The volume of Coca-Cola sold in bottles first exceeded that sold through soda fountains in 1928.

1950
Did you know in 1950 Coca-Cola in a contour bottle was the first commercial product to appear on the cover of Time magazine? The appearance solidified Coca Cola as an international brand. The magazine originally wanted to place long-time company leader Robert Woodruff’s image on the cover, but he refused, saying the brand was the important thing and Coca-Cola itself should be featured.

1955
Did you know that until 1955, Coca-Cola was available only as a soda fountain drink and in 192ml contour bottles? 1955 saw the debut of the King Size (296ml and 355ml) and Family Size (769ml) contour bottles in the US, marking an important step in giving consumers packaging options to meet their needs.

1960
Did you know the idea of putting Coca-Cola in cans was tested before World War II, but the testing stopped when materials were not readily available during the war? It was not until 1960 that Coca-Cola in 355ml cans was introduced to the US public. Early can graphics included a picture of the contour bottle so people would know the same Coca-Colathey found inside a bottle was inside the can.

1993
Did you know the 592ml PET version of the contour bottle for Coca-Colawas introduced in 1993? The bottle helped distinguish Coca Cola from other beverages, just as the glass contour bottle had done in 1916.

1996
For years, folk artists used Coca-Cola as a subject for their artwork because of its popularity. During the 1996 Olympic Games in Atlanta, Georgia, USA, the company orchestrated the Coca-Cola Olympic Salute to Folk Art exhibit, which included the work of folk artists from 54 countries who used indigenous materials to create Coca-Cola contour bottles. These three-dimensional sculptures ranged from two- to 12-feet tall.

1997
In 1997 The Coca-Cola Company test-marketed an innovative contour can, inspired by the glass contour bottle. Though the contour can was not widely introduced, today’s aluminium contour bottles have taken that desire to differentiate our packaging one step further.

2005
The Coca-Cola Company introduced an aluminium version of the contour bottle in 2005. The company and leading-edge design firms from five continents launched a marketing campaign featuring a series of designs for the new aluminium contour bottle, called “M5” (Magnificent 5).