A Living Legend: The Story of the First Coca-Cola Mura

The story of the first Coca-Cola mural is a testament to longevity: a beverage that's been around for 130 years, a pharmacy that's been in operation for 122 years, and a man who had the same job for a half-century.

The mural itself (a white “Drink Coca-Cola” logo on a red background) was painted in 1894 on the side of Young Brothers Pharmacy (then called Young Bros Drug Company and founded by brothers W.W. and W.G. Young) in the small town of Cartersville, Georgia, about an hour north of Atlanta. 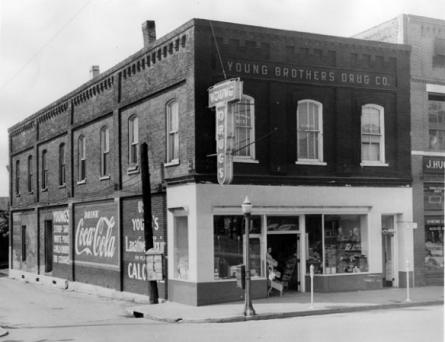 Many years later, when Dean Cox was hired by the pharmacy in 1960, the wall proudly advertised Coca-Cola, though the original sign had been painted over many times by then. Cox was fresh out of pharmacy school and excited to start his first job.

Eight years later, the daughter of one of the original Young brothers retired and asked Cox if he would like to buy the business. He agreed, and in 1970 also purchased the building from the great-granddaughter of the man who built it.

As Cox puts it, before his acquisition, “it was 76 years of one family paying rent to one other family.”

Cox says that The Coca-Cola Company had regularly repainted the sign until the late-1970s. He’d always heard that under all that paint was the first-ever Coca-Cola mural, so in the early 1980s he enquired to the Coca-Cola archives in Atlanta. Their records confirmed the claim.

Cox spent several years researching the sign and became interested in the idea of restoring it. In 1989, he contracted with Alison Free and Aggie Ferguson, two women who had a passion for restoring old Coca-Colasigns.

Over several weeks, Free and Ferguson painstakingly removed 25 layers of paint to finally uncover the original painting, then brought it back to vibrant life as accurately as possible.

Once the restored mural was unveiled and reported in newspapers across the country, Cox became immersed in the world of Coca-Cola collectors. The pharmacy received an influx of visitors and mail from all over the U.S. and from other countries, as well. Cox remembers receiving some mail addressed only to “First Coca-Cola Sign, Cartersville, Georgia.” 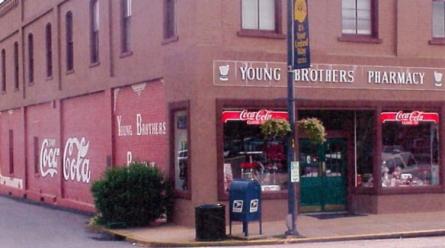 Today, the pharmacy is owned and operated by Cox's brother-in-law, William Tatum, who has worked at the store since 1972, just two years before the arrival of Australia’s iconic Coca-Cola billboard.

Tatum says the store now features a large variety of Coca-Colamemorabilia for sale and a guest book for the many Coca-Cola fans who still make the pilgrimage to this historic landmark.

Tatum says the attraction benefits not only the store, but the larger community as well. “It's wonderful because when people visit Cartersville to see the sign,” he said, “they also stop in at the other businesses downtown.”

For Cox's part, the historic mural is intrinsically tied to his long and happy career. Between the store and the sign, he takes pride in keeping two remarkable traditions alive.

“It's important to me personally because I was employed at the same business, doing the same job, in the same location, for 50 years,” Cox says. “And that doesn't happen too often.”

In fact, before he retired, Cox had customers whose parents, grandparents, and great-grandparents had also been his customers in previous decades.

Cox also says the continuing popularity of the Coca-Cola mural is a testament to a “product that everyone enjoys.” And he's proud to be the owner of a unique piece of history.

“It's wonderful,” he says, “because there's nothing like it in the whole world.”