About Caffeine in Drinks | Coca-Cola Australia

About Caffeine in Drinks | Coca-Cola Australia

Caffeine is found in many common foods and drinks such as tea, hot cocoa, chocolate, sparkling drinks. People around the world have enjoyed caffeine as part of their diets for hundreds of years. Coca-Cola in Australia offers both caffeine-free and caffeinated drinks.

One of the most studied ingredients

Caffeine is a comprehensively studied ingredient in the food supply, with centuries of safe use. Regulatory agencies throughout the world including Food Standards Australia New Zealand (FSANZ), Food and Drug Administration in the US (FDA) and the UK's Food Standards Agency (FSA), consider the appropriate use of caffeine in food to be safe and acceptable.

Pregnant or nursing women, or women trying to become pregnant, should consult a doctor regarding caffeine consumption.

Caffeine in the diet

The most commonly known sources of caffeine are coffee, cocoa beans, and tea leaves. Caffeine is also an ingredient in sparkling cola beverages and other drinks. Caffeine levels in popular products are as follows: 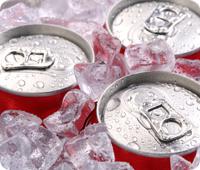 Caffeine is an integral part of the complex flavour and overall profile of some sparkling drinks, which people enjoy for refreshment, taste and hydration. For over 100 years, in some cases, the formulae for these drinks have carefully balanced a mix of ingredients, including sweeteners, carbonation, caffeine, and other flavourings to produce the refreshing and tangy taste that consumers prefer, especially when served cold or with ice. The bitter taste of caffeine is part of the complex flavour profile of these drinks.

The amount of caffeine in our cola soft drinks is relatively small, 9.6 - 12.8 milligrams of caffeine per 100ml serving or 24 - 32mg per 250mL cup, less caffeine than a cup of instant coffee (which is approximately 77.5mg per 250mL cup). However, because some people prefer drinks without caffeine, many sparkling drinks are also available in caffeine-free versions.

* Intakes for Water, Potassium, Sodium, Chloride, and Sulfate. National Academy of Sciences. Institute of Medicine. Food and Nutrition Board, 2004. 4; 133-134