Editor’s Note: Earlier today, Coca-Cola introduced “Taste the Feeling”, our first new global marketing campaign in seven years. We invited Ted Ryan, director of Heritage Communications at The Coca-Cola Company, to reflect on the taglines and creative campaigns that have delighted consumers for more than a century.

Advertising slogans are a part of everyday life for consumers around the world, and Coca-Cola has produced some great ones throughout our nearly 130-year history.

Our very first ad was published in the Atlanta Journal newspaper on May 29, 1886, a few short weeks after the drink was first served in Jacobs’ Pharmacy. The ad featured one of our longest-running slogans: “Delicious and Refreshing.” Those two words appeared on almost every ad or piece of merchandise (trays, clocks, etc.) until 1920.

Our very first ad was published in the Atlanta Journal newspaper on May 29, 1886, a few short weeks after the drink was first served in Jacobs’ Pharmacy. The ad featured one of our longest-running slogans: “Delicious and Refreshing.”

In the mid-1890s, The Coca-Cola Company hired Massengale Advertising of Atlanta. They produced very elegant advertising for the company featuring slogans like “Coca-Cola is a Delicious Beverage, Delightfully in Harmony With the Spirit of All Outings,” “The Great National Temperance Drink,” or “Coca-Cola Revives and Sustains.”

While these wordy slogans were in line with the advertising of the day, the company’s president, Asa Candler, and head of advertising, Samuel Candler Dobbs, spotted the trend toward national magazine advertising with the standardisation of four-colour printing, which rendered more visually dynamic ads than their black-and-white predecessors.

To produce this enhanced advertising, Candler and Dobbs hired the D’Arcy agency from St. Louis. D’Arcy was significant in helping to create a brand identity for Coca-Cola. W.C. D’Arcy was associated with Coca-Colafor the next four decades (he even served on the Board of Directors for a time) until his retirement in 1945.

Together with his creative director, Archie Lee, he crafted some of the greatest slogans in advertising history. While “Delicious and Refreshing” was part of the plan D’Arcy’s first big change was to add an arrow to all the advertising and packaging while adding the slogan, “Whenever You See an Arrow, Think of Coca-Cola.” 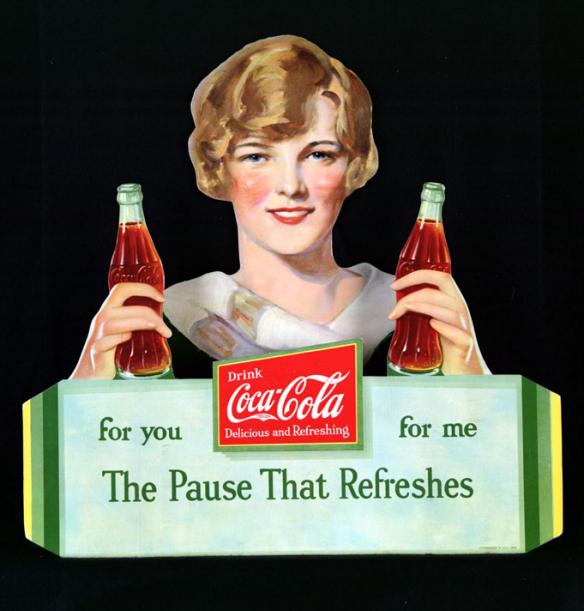 Our longest-running tagline, “The Pause That Refreshes” (1929), was used in one form or another for almost three decades.

In 1907 they added the slogans “Good to the Last Drop,” (yes, we beat Maxwell House with this one) to the advertising. The team hit their stride by the 1920s when they created the “Thirst Knows No Season” (1922) and our longest-running tagline, “The Pause That Refreshes” (1929). That campaign was used in one form or another for almost three decades.

Advertising began to change after World War II, when music and sung jingles played an increasingly important role in campaigns. Slogans became shorter to fit into a catchy melody.

By 1955, Coca-Cola began to look for another agency who specialised in the modern radio and television advertising. In 1956, McCann Erickson was named the lead worldwide advertising agency for Coca-Cola.  The changes in advertising were dramatic, and when the McGuire Sisters sang “Be Really Refreshed,” the company was aligned with the times.

In 1963, Bill Backer, creative director for McCann, penned the jingle “Things Go Better with Coke,” and had the Limeliters record a demo in a run-down apartment on 57th Street in New York City.

In 1963, Bill Backer, creative director for McCann, penned the jingle “Things Go Better with Coke,” and had the Limeliters record a demo in a run-down apartment on 57th Street in New York City.  Backer had to splice together several tapes, and you could still hear several flaws in the recording. The company loved it and used that demo for the next six years! Backer also developed the slogan, “It’s the Real Thing,” for which he and his team wrote “I’d Like to Buy the World a Coke” in 1971.

By 1993, with the constant evolution of advertising, The Coca-ColaCompany once again switched agencies. We hired CAA (Creative Artists Agency) to develop ads for Coca-Cola. CAA would hire the best and brightest producers and directors in the field to produce ads based on the slogan, “Always Coca-Cola” (1993). Luminaries like Ken Stewart (the mastermind behind the iconic Coca-Cola Polar Bears) and Rob Reiner created the ads, and the jingle became an instant classic. 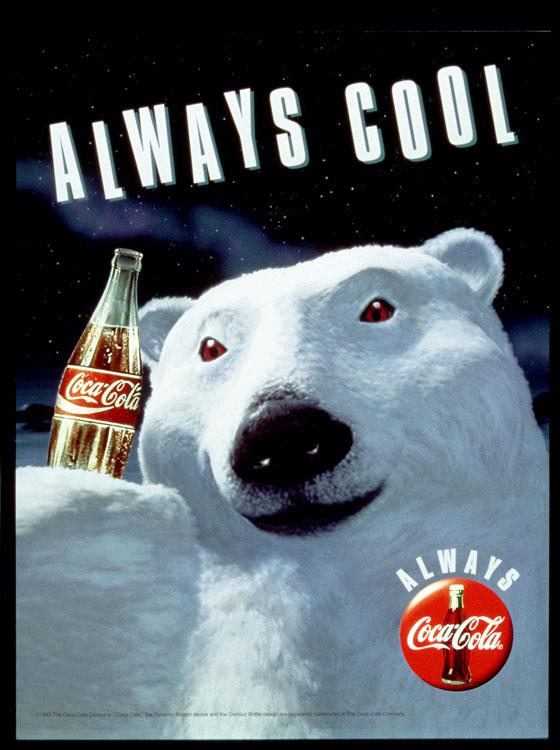 Ken Stewart was the mastermind behind the iconic Coca-Cola Polar Bears.

Animated ads have always been a staple of Coca-Cola advertising, and the “Coke Side of Life” (2006) and “Open Happiness” (2009) campaigns featured some of the best the company has ever produced, including “Grand Theft Auto,” “It’s Mine” and “Happiness Factory.”

Slogans, by their very nature, are supposed to be “mindstickers” or “earworms.” The purpose of advertising is to make people associate a slogan with a brand. Coca-Cola is fortunate to have had some of the greatest creative talent in advertising work on our marketing. While the fictional Don Draper from Mad Men could always come up with a slogan, in the real world, industry giants like W. C. D’Arcy, Archie Lee and Bill Backer produced some of the greatest slogans, jingles and ads of all time.

Ted Ryan is director of Heritage Communications at The Coca-ColaCompany.