If you’ve got Santa in your life, you know that he brings the presents. But what if you updated the sleigh to a fleet of sparkly trucks? You’d get the Coca-Cola Caravan.

The first trucks in the Coca-Cola Caravan weren’t even real. They were an ad created in 1995 by American agency W.B. Doner and featured three custom made 18 wheeler props.

Here’s the history of the idea brought to life.

Created by ad agency W.B. Doner, “Christmas Caravan” featured the special effects of the renowned company Industrial Light and Magic, who had worked on the “Star Wars” movies, “Raiders of the Lost Ark” and “Forrest Gump.”

In the commercial, three semi-trailer props were crafted into an endless caravan of Coke trucks, passing through hillsides, valleys and towns. Each truck was a 40-foot, 2-ton “light brite” on wheels with more than 30,000 bulbs.

Instead of the usual wrapping around the Coke bottle, the trucks brought in all-new Christmas packaging with heritage Sundblom imagery.

Available in the USA, UK, Australia, Hong Kong, South Africa, Singapore and the Philippines, the ‘Santa packs’ made the drink into a pre-wrapped Christmas gift.

Bringing the Christmas spirit out stronger than ever, the ‘Christmas Caravan III’ ad broadcast across more than 100 countries to millions of viewers. What could possibly top this?

After years of iconic commercials, the Christmas Caravan started to come to life for real, starting with a trip across the USA.

“Christmas is a family season, and that's what the spirit of the ‘Caravan’ ads is,” said Ted Ryan, Coca-Cola’s former chief archivist.

"As soon as the physical trucks began to visit communities it made the ads resonate a little bit more," he said.

2010: Great Britain gets its own Caravan

The truck tour made its debut in Great Britain after proving popular in Germany and across Europe. Millions of people have followed its journey, from villages to seaside towns, even using it for marriage proposals.

After travelling more than a million kilometres and making more than 300 stops in countries around the world, the first Coca-Cola Christmas Truck made its very first journey around Australia in 2017.

The Christmas truck tour is back in Australia and bigger than ever. Partnering with the Salvation Army for the second year, the 10,000km tour is set to remind Aussies that it feels good to give.

Get involved with one of Australia’s biggest Secret Santa exchanges, and spark your festive spirit this Christmas.

For more information about the campaign and to follow the truck’s journey live visit www.coca-cola.com.au or on Facebook at https://www.facebook.com/CocaColaAustralia/ 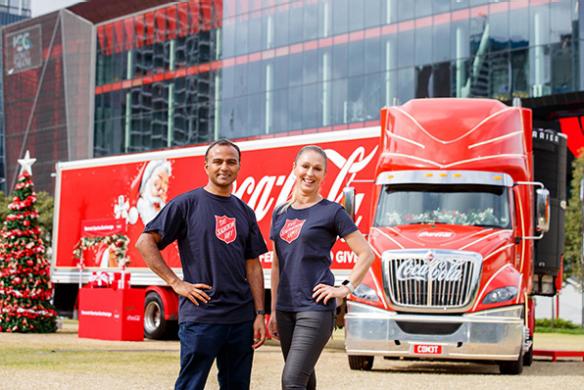