Shining a Light on the Community: Kings Cross Walking Tour

Shining a Light on the Community: Kings Cross Walking Tour

Kings Cross, one of Sydney’s most vibrant suburbs and home of the famous Coca-Cola Billboard will ignite for VIVID Sydney – Australia’s largest festival where technology and creativity collide.

Coca-Cola has a long history in the neighbourhood, starting with the very first billboard built in 1974. When an upgrade was needed, letters from the original Coca-Cola billboard were auctioned off in 2016, with all proceeds going directly to local charity Wayside Chapel. Coca-Cola first hosted Kings Cross as an official VIVID precinct in 2017, when the Billboard came alive with portraits of Kings Cross locals.

This year the two icons of Kings Cross, the Coca-Cola Billboard and the Wayside Chapel, come together to show locals and visitors the community spirit of the Cross.

On Friday 1st June and Friday 15th June, Wayside Chapel will host bespoke evening walking tours that go into the nooks and crannies of Kings Cross to celebrate the VIVID event and share the truth of what it's like to live on the streets of Sydney.

Through both the glitter and grit, the Wayside Chapel is a shining light for people like Andrew Windsor, former rough sleeper, and now Wayside employee. Andrew is sharing his stories and sites of significance, providing a rare insight into street life. To experience the Cross in a way unlike any other book a tour with Andrew here, or go here to donate to the Wayside Chapel Winter Appeal.

Can’t attend a tour? Read on for a DIY Kings Cross Walking Tour.

Gateway To The Cross

You mightn’t realise it but you are currently standing on a very significant site. This intersection at the top of William Street has always been busy. The surrounding suburbs of Potts Point, Woolloomooloo and Elizabeth Bay remain important areas for Sydney’s First Nations people. Oxford Street and William Street follow important tracks used by the local Gadigal people.

It wasn’t until the 1920s that the area well and truly exploded. Post-war apartment living took off ahead of the rest of Sydney. Night-time entertainment and dining arrived, and an increasing number of cafés, restaurants, wine bars and theatres began to open. New neon advertising signs dominated streetscapes and shop fronts.

Where you’re standing right now, atop the intersection of Darlinghurst Road and William Street, a beacon can be seen from far and wide: the iconic Coca-Cola billboard has been a permanent fixture on Sydney’s landscape for more than 40 years.

The arrival of a striking new neon Coca-Cola Billboard at the junction of the six roads at the top of William Street in 1974 signaled big things for area. The Kings Cross tunnel was almost complete and the billboard quickly became known as ‘the Gateway to the Cross’. It’s a fitting place to start an exploration of Kings Cross.

The 1974 Coca-Cola billboard featured a weather update alongside other Coca-Cola advertising panels. The old sign was removed in 2015 and more than 10 tonnes of material were recycled. All eight letters were auctioned off by Coca-Cola with all the proceeds going directly to 50 year old local charity the Wayside Chapel.

The neon sign was replaced by two kilometres of rope LED lighting that you now see before you. Previously the sign was controlled by a switching system the size of a Kombi van, but the new control panel is barely larger than an iPad.

This year for VIVID KX the Coca-Cola Billboard has received special artistic treatment, with the screening of new graphic content by artist Sydney Bouhanich, celebrating its role as a central and colourful meeting point for the community in When Art Meets Technology: Under the Coke Sign. After dark during Vivid Sydney, the sign will burst into glorious animated life and colour. 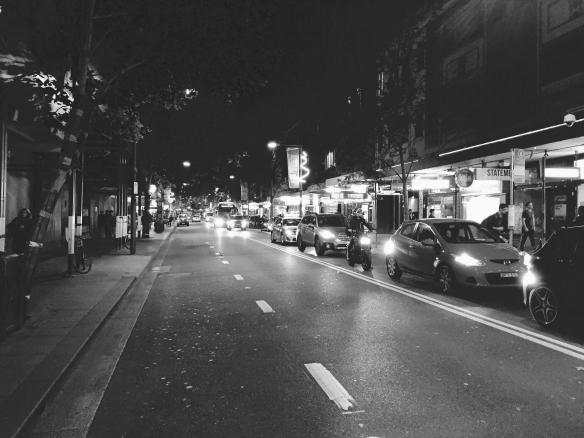 The colourful strip along Darlinghurst Road will be illuminated with hanging mobiles across twenty-five smartpoles, specially installed for Vivid Sydney 2018.

Deeper in Fitzroy Gardens you can take a journey into a world of augmented reality (AR) with Hidden ARt, created by TAFE NSW students. Open your smartphone’s AR camera, click on the Vivid Sydney light icon and scan the area around you to unlock Hidden ARt and reveal the stories behind 14 media sculptures. Different sculptures will be unlocked each week.

Linking the Coca-Cola sign and the fountain, The Light of Moving Art will feature a pattern of four modernist artworks, between Fitzroy Gardens and the Coke sign. 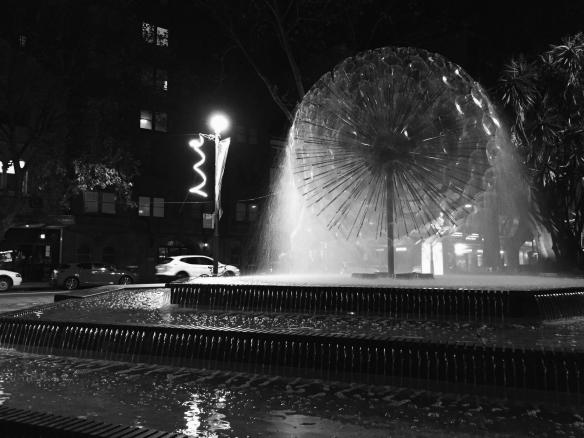 Another Kings Cross icon, the modernist war monument El-Alamein Memorial Fountain opened in 1961 as a memorial to the Australian Imperial Forces 9th Division. The Fountain commemorates the Battle of El Alamein, Egypt, in World War II.

During Vivid Sydney 2018, the internally lit sphere of water which sits at the heart of the Fountain will become the canvas for a sensitive lighting design inspired by the modernist design aesthetic of the mid-20th century.

The fountain and the surrounding Fitzroy Gardens will be respectfully lit for VIVID KX. The Colours of Remembrance uses beautiful, slow changing patterns projected onto the water to represent the various arenas in which Australians have fought.

The Cross was the place to be after World War II. Along with the arrival of fast food, surfing and the Holden landed United States servicemen. They brought new music and ready cash and settled in the Cross partly because of its proximity to the naval base at nearby Garden Island. Their numbers were bolstered in 1967 when thousands of GIs came to Kings Cross on Rest and Recreation from the war in Vietnam, many of whom stayed on.

The area peaked in the post-war period as Sydney’s largest tourist accommodation and entertainment area, as well as its red-light district. The strip clubs that lined Darlinghurst Road along with the area’s numerous brothels came to be known as ‘The Glittering Mile’.

At the heart of the red-light district in the 1970s, the Nevada boasted ‘the biggest bed in Australia’. The Nevada is now the World Bar, and besides having housed the most famous brothel in Australia, this Victorian terrace quartered numerous venues in its long life. Today it stands transformed as a bar and nightclub.

Looking up at the beautiful archways on the balconies above, imagine women leaning over and whistling down to the men on the street to encourage them upstairs, or punters enjoying some air after a gig.

Due to an increase in visible street prostitution, the Cross became associated with the seedier aspects of Sydney’s nightlife. It had a colourful, well-populated underbelly and a notorious reputation for links to organised crime, but the Cross always looked after its own.

Figures such as Julie Bates from Harm Reduction Australia and Professor Basil Donovan were at the heart of change, ensuring working women were protected. They campaigned relentlessly for the use of prophylactics and ensured Sydney was world-leading in the fight against HIV/AIDS.

The Cross established a reputation as the bohemian centre of Sydney, with café culture attracting artists and performers from all over Australia and the world. This legacy lives on today in the Piccolo Café which has been operating for more than 65 years.

Locals claim the Piccolo Café Bar is the longest running café in the Cross, possibly running from as early as 1940. The Piccolo is owned and managed by octogenarian barista Vittorio Bianchi, who arrived in Sydney from Naples as a teenager and has become a Kings Cross institution himself.

Vittorio famously worked from 6pm to 6am and had musicians, dancers, writers and painters coming in every night for coffee. He’s famous in the Cross and his quaint little coffee shop has served the suburb’s diverse characters, artists and musicians for decades.

A Home for Neglected Musical Theatre

At the top of Elizabeth Bay Road between the unofficial border of the Cross and Elizabeth Bay, you will find the Hayes Theatre Company. This is the home of underground, independent and neglected theatre, established in 2014.

The Cross has always been a safe haven for performers, and the neon lights have cast a protective glow on people from all backgrounds. It has helped launch the careers of many, not least of which is Carlotta, “the Queen of the Cross”. Australia’s first widely known transgender performer rose to prominence in Kings Cross while working at the famous Les Girls cabaret. She was the inspiration for Priscilla, Queen of the Desert.

of New York in 1969, known as the beginning of the gay rights movement. After the Sydney protest march, some participants headed to the Fitzroy Garden, just around the corner from the Hayes Theatre, where police arrested 53 people, although most of the charges were later droppedThe inaugural Sydney Gay and Lesbian Mardi Gras pro-gay rights protest march was held on the evening of 24 June 1978. It also commemorated the Stonewall Riots.

The Heart and Soul 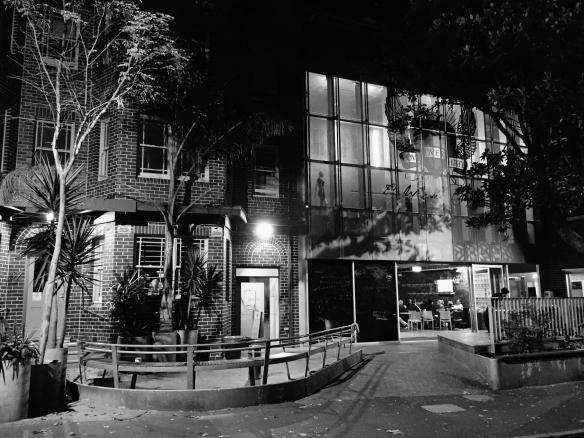 Kings Cross has long been a hotbed of social change. Reverend Ted Noffs opened Wayside Chapel in 1964 when Kings Cross was a place for disaffected young people to gather. It was the place that Aboriginal activist Charles Perkins AO set out on the Freedom Rides in 1965, drawing attention to the scourge of racism in rural New South Wales.

From a few rooms in 1964, the Chapel grew through drug epidemics, the HIV/AIDS crisis, burgeoning homelessness and neighbourhood redevelopment. It’s place at the heart of the Cross means it has flourished to include the Wayside Café, Aboriginal Program, Rooftop Garden and Day to Day Living Program. In 2014, it turned 50 and celebrated with the whole community.

The Ghosts of Kings Cross Past

A wonderful spectre in the Parisian-style alleyways that spread out like capillaries from the main arteries of Darlinghurst Road and Macleay Street is the Minerva Theatre, on the corner of Orwell Street. Built in 1939, this stark white building is an icon of the past, its impressive art deco architecture a shining example of the Cross’s glitz and glamour. The Minerva is still a home for art and culture, now housing a contemporary art gallery.

The famous Coca-Cola billboard letters were auctioned off in 2016, and the proceeds went directly to Wayside. In 2017 Kings Cross became a VIVID precinct, and the Billboard hosted the faces of many of the local characters.