Meet the Digital Artist Behind the Coca-Cola Polar Bears

Meet the Digital Artist Behind the Coca-Cola Polar Bears 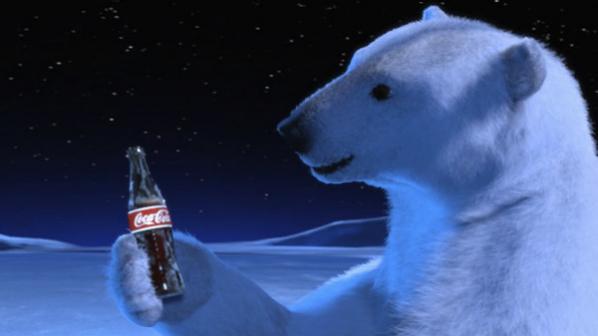 Believe it or not, the first-ever TV ad featuring the beloved Coca-Cola polar bears turned 21 this year. 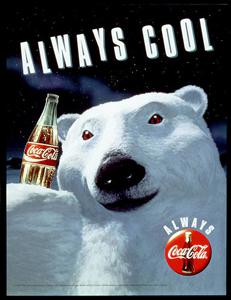 Stewart enlisted the help of Los Angeles-based Rhythm & Hues to animate the ad using what was considered at the time to be state-of-the-art computer graphics. Using storyboards by illustrator Eugene Yelchin, Stewart and the Creative Artists Agency (CAA), Rhythm & Hues created pencil sketches of the bears. Next, the team studied films and photos of polar bears to understand how they move their heads, bodies and limbs.

A sculptor then created a 3D clay model of the bear's head, which was digitized and stored in advanced computer graphics software. An animator plotted points along the body of the model until a schematic of the bear appeared on screen. Once the image was refined and loaded to memory, the bear could move. Other elements — such as Coca-Cola bottles — were scanned and introduced to the storyline. Once the bears' basic movements were completed, the rest of the picture was refined. Fur was added, eyes were completed, background was "painted in" and lighting details were fine-tuned.
The polar bears were an immediate hit with viewers and made encore appearances in two spots during the 1994 Olympic Games, in which the bears slid down a luge and soared off a ski jump. Bear cubs were later introduced in a holiday ad.
We recently caught up with Todd Shifflett, a visual effects supervisor at Rhythm & Hues who has worked on several hit animated movies, including Snow White and the Huntsman, Happy Feet and Babe. He was assigned to “Northern Lights” as a digital artist shortly after joining the Rhythm & Hues team.

The world of computer graphics was much different back in 1993. Help us understand the technical challenges you faced in bringing the polar bears to life on screen.

It’s funny to look back now and wonder why that commercial was so groundbreaking, when you consider how far technology has come since then. The processing power of the computers we were using was nowhere near what it is today. Our most powerful computers could barely render all of the polygons, so we used lots of little technical tricks to pull it off and make the bears look furry without being able to actually render fur. If you look at the evolution of the bears over the years, you get an idea of how much technology has improved.

Any special memories stand out from the project?

Oh, yes. This was, of course, well before the days of being able to back up work on the cloud. We had to back up on reel-to-reel tapes in a machine room, which was a labor-intensive process that required very long hours. None of us got much sleep during that project. As the new guy, I was working the night shift one night —  we had more people than computers — when I accidentally typed a command to remove the entire project from the disc! Panic quickly set in, because I thought I’d wiped out everything. I went room to room and finally fessed up. Luckily, I found someone who helped me restore from backup, and the project lived on.

What was the overall reaction to the first polar bear ad?

The commercial definitely put us on the map. Once the first one was released, it became so popular that Coke decided to produce more of them. The polar bears became a larger part of the overall campaign... I remember seeing them on billboards, for example. I was involved in at least three more commercials, including one of the polar bear family pushing a Christmas tree down the hill and another for the 1994 Olympics. Technology was changing quickly and we needed to adjust for that, but we also wanted to maintain the stylistic look of the original incarnation of the bears. They eventually became fluffier, and newer tools enabled us to animate more than one bear at a time.

How did the animation techniques used in ‘Northern Lights’ influence future projects at Rhythm & Hues?

Some of the techniques we used in commercials and movies that followed definitely came from that first polar bear ad. For example, the tricks we used to create the bears' fuzzy look helped us when we made the (1995) movie, Babe. We faced similar challenges with that project because we had to take live-action animals and put new snouts on them without being able to actually render fur.

The polar bear ad was an important part of my development because I got to work with and learn from some of the most brilliant people in the industry. I was lucky to be part of the process in the very beginning when we didn’t know how it would get done or what we were capable of from a computer processing standpoint. It was an exciting time, and it’s nice to know people still look back on it as a document in computer graphics history.