Why Fanta is Shaking up Soft Drinks

Why Fanta is Shaking up Soft Drinks

Who invented Fanta? You might have heard all sorts of stories. The 80-year history of the iconic drink might still surprise you.

While the brand’s most celebrated iteration is the iconic orange flavour, the soft drink has proved itself surprisingly adaptable over its almost 80-year history.

“Fanta’s really fun. It’s a bit of a cheeky brand. We can get away with a little bit more,” said Fanta brand manager Josh Gonski.

One of the hallmarks of the brand’s popularity is its unique ability to convey light-hearted enjoyment through a variety of different flavours.

“Everything that we do has fruit at the heart of it,” said brand manager Josh Gonski.

“Many of the brands within Coca-Cola have their core flavour. For Fanta it’s all about being fruit-based. Everything that we do has fruit at the heart of it, with orange as the hero variant,” he said.

With the recent launch of the new sensory range, we look back over Fanta’s surprising story.

The origins of Fanta

So let’s start this story at the beginning.

Fanta traces its origins back to World War II. At the time, the Coca-Colabusiness in Germany was one of the world’s most successful, second only to the company’s sales in the United States.

In 1939 Coca-Cola had 43 bottling plants and over 600 local distributors across the country. But with the outbreak of World War II it became impossible to import the ingredients needed to formulate Coke.

To keep the operation running, the German-born head of the local operation, Max Keith, came up with a way to mix whey and apple fibre with whatever seasonal fruit was available. The result was a soda a bit like ginger ale. Max marketed this new drink under the name Fanta, a shortening of the German word ‘fantasie’.

Through the sales of Fanta, Max kept the local operation alive, despite not being able to have any contact with US headquarters. Once the war was over, Max returned the profits to the company’s headquarters in Atlanta and Coke resumed its German operations.

The modern version of Fanta

The Fanta we know now was born in Naples, Italy, where in 1955 Coca-Colabegan using local citrus to formulate the now famous orange flavour. 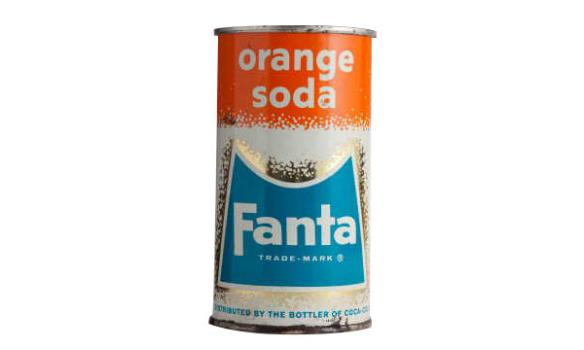 “Everything that we do has fruit at the heart of it,” said brand manager Josh Gonski.

Legendary designer Raymond Loewy came up with the original ‘twin peak’ logo which was one of 25 options he presented Coca-Cola. It went on sale in the United States in 1960 and by 1969 it was the biggest-selling flavour on the planet.

Currently, Fanta is the second-largest soft drink brand in the world, a position it maintains here in Australia.

First on sale in 1960, currently Fanta is the second-largest soft drink brand in the world, a position it maintains here in Australia.

Fanta of the future

The latest chapter in the long story of Fanta’s innovations begins with the launch of its new sensory range in February 2017.

In addition to the core range of Fanta Orange, Zero Orange, Grape, and Raspberry, Fanta is now launching a series of multi-sensory products that are as much about touch, sound, sight, and smell as they are about taste.

“People really love the flavours, but we wanted to up the ante and bring out something totally unique and different to everything else in the soft drink category, to create new experiences for teens to try,” said Josh Gonski.

“We talk about teens wanting ‘omnisensorial’ experiences, which is where they’re looking for something that’s going to awaken all the different types of senses. Early adopters want to experience something new and this range really delivers on this,” he said.

To enjoy the omnisensorial sensory experience of Jelly Fizz, for instance, consumers need to shake the can 10 times to activate an almost indescribable, well, jelly fizziness.

“It’s like a delicious, liquid jelly. Soft drink blended with juicy liquid jelly pieces. You can’t really explain it to someone, they have to try it for themselves,” said Josh.

“Also, the trend of blending different textures is really popular in the culinary world now,” he said.

One of the first entries into the sensory range is Jelly Fizz.

The original Jelly Fizz concept was launched in Japan and Hong Kong about five years ago (known as Furu Furu Shaker), and the local Coca-Cola team felt they could replicate its incredible popularity here in Australia.

“The challenge has been how to Westernise the concept of what is a really cool but very different drinking experience,” said Josh.

“We needed to educate teens that it’s okay to shake the can without it exploding, despite it going against everything they’ve ever known about soft drinks,” he said.

Before unveiling the new range to local consumers, Josh and his team undertook extensive consumer research to gauge its potential here. They invited teenage groups of friends in to try out Jelly Fizz prototypes and view some of the advertising materials together to hear their feedback.

“In terms of general research, we’ve started to adapt a little bit of a different approach to doing it,” Josh said.

“Doing research with friendship groups has really helped. Rather than it being a group of random people who are a bit nervous to speak, being in friendship groups allows them to be comfortable and give their true, honest reactions.

“We’ve done a lot of research with a lot of different cultures and age-groups, where, if you get a consistent view across the groups, I think you’re onto something,” he said.

While Fanta will no doubt continue its history of innovation, there’s one thing that won’t change: the iconic taste of Fanta Orange.

“With Fanta Orange, that’s a really big part of our portfolio,” said Josh. “It has a loyal fan base, and that is incredibly important to us.”