As University of Georgia fans prepare to cheer on their beloved Bulldogs for yet another season, Coca-Cola is releasing a special bottle commemorating the team’s first College Football National Championship in more than four decades.

The bottles will be sold for a limited time in six-packs at select retailers, grocers and convenience stores across Georgia, starting Aug. 15. Head Coach Kirby Smart unveiled the bottles today during UGA’s annual media day in Athens.

Penley’s ties to both Coca-Cola and UGA run deep. He was born in Chattanooga, Tenn., where his grandfather worked as a route driver for the first-ever Coca-Cola bottler. Growing up in Macon, Ga., he was inspired by cartoonist and MAD magazine co-founder Jack Davis, whose art graced the last Coca-Cola bottle commemorating a UGA national championship in 1980. 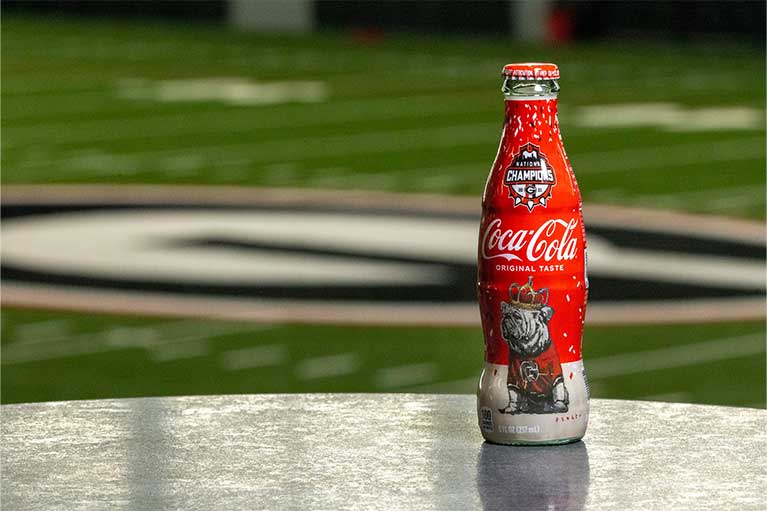 “Jack has been such an inspiration to me over the years,” Penley said. “As a kid, I loved his art and especially his work for UGA and Coca-Cola, and we got to be friends before he passed away in 2016. I wish he was still here so I could show him my Coke bottle and debate whose Uga is better.”

Penley, who attended the University of Georgia in the 1980s, painted the image the day after the Dawgs beat Alabama for their third title, the euphoria of his favorite team’s win fueling his creativity.

Penley was first commissioned to paint a piece for The Coca-Cola Company in the early 2000s, and his artwork has since been showcased in the World of Coca-Cola in Atlanta and in company offices around the world.

“A Coke bottle is a common bond we all share,” Penley said. “I manipulate it with my colors and my brushstrokes to help the public see it in a new way. I want people to take away a feeling of comfort, optimism and hope. Because to me, Coke is all of those things.”