Earlier this year, Coca-Cola Starlight offered fans a taste of outer space. Now, the second Coca‑Cola Creations offering presents the first-ever Coca-Cola flavor born in the metaverse. Coca-Cola Zero Sugar Byte will bring the flavor of pixels to life in a limited-edition beverage that transcends the digital and physical worlds.

Coca-Cola Zero Sugar Byte launched in extremely limited quantities in select countries in Latin America on April 4 in retail outlets. In the United States, on May 2, the product will be exclusively available to purchase in twin packs of 12.5-oz. slim cans online at www.coca-cola.com/creations, making the can itself a portal between the digital and physical worlds. China will follow with a retail launch on May 23. 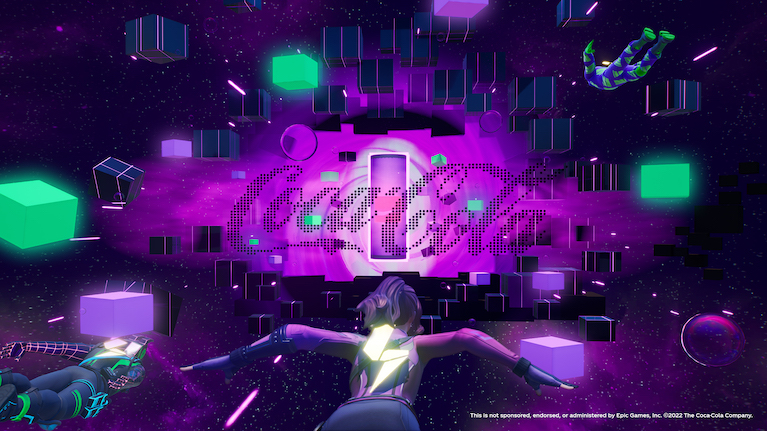 Similar to the Coca-Cola Starlight drop, which featured an Augmented Reality (AR) “Concert on a Can” starring pop star Ava Max, a suite of immersive digital experiences will introduce fans to Coca-Cola Zero Sugar Byte. The centerpiece is Pixel Point, an Island Created in Fortnite Creative designed by Coca-Cola and lifestyle and gaming organization PWR. Upon entry, players will discover Coca-Cola Zero Sugar Byte in the metaverse and interact with fellow gamers through a series of four sensory-inspired, multiplayer mini-games*: The Castle, The Escape, The Race and The Tower. Each immersive room poses its own challenge that can only be solved by working in tandem with fellow players to progress up the tower.

"This new Coca-Cola Creations flavor is an amazing nod to gamers from one of the most iconic brands in existence, and we’re proud that we could help create something special for our shared communities to celebrate its launch,” said Lachlan Power, professional gamer and PWR founder. “It’s been an exciting project for PWR to collaborate on by creating this experience which facilitates teamwork and player connections whilst representing the vibe of this new Coca-Cola Creation.”

Additionally, fans can scan a Coca-Cola Zero Sugar Byte package at www.coca-cola.com/creations to access an augmented reality (AR) game, which tells the story of BYTE, an 8-bit pixel left behind when Coca-Cola Byte entered the metaverse. Using fingers to hold down arrows, players can guide BYTE to “jump” up a spiral staircase so the lone pixel can rejoin the Coca-Cola logo. Players’ finish times will be posted to a virtual leaderboard that can be shared on social media.

Coca-Cola, which has a longstanding connection to gaming, first entered the metaverse last year with its first-ever NFT (Non-Fungible Token) collectibles. On International Friendship Day 2021, four unique Coca-Cola NFTs were auctioned as a single “loot box” to raise funds for Special Olympics International. Most recently the brand announced a global partnership with Riot Games as a Founding Partner of League of Legends’ Wild Rift and Wild Rift esports.

*The independently created Fortnite Creative experience is not sponsored, endorsed or administered by Epic Games Inc.