The iconic Coca-Cola 'Neon Spectacular' in Atlanta's Five Points district will be replaced by January 2020 with an energy-efficient LED sign.

Coca-Cola is giving its signature sign in downtown Atlanta a much-needed technological upgrade, continuing the company’s legacy of investment and advertising in the neighborhood where the beloved beverage was born more than 133 years ago.

Starting next week, the neon “Coca-Cola Spectacular” atop the Walgreens building at 25 Peachtree Street will be dismantled. But fear not: the beloved Five Points sign isn’t going anywhere; it’s coming down temporarily to make way for a new-and-improved successor that will be in place by January.

The circular sign – which spans 33 feet in diameter – has served as a cultural landmark for both the city of Atlanta and Coca-Cola since 2003. It overlooks the spot where the first Coca-Cola was served at Jacob’s Pharmacy in 1886, and sits just behind Woodruff Park, named for the company’s longest-standing leader, Robert Woodruff. The gleaming red disc also towers over the downtown commercial district, which is home to dozens of companies and Georgia State University, and a stone’s throw from Atlanta’s premier sports, entertainment and convention venues and tourist attractions. 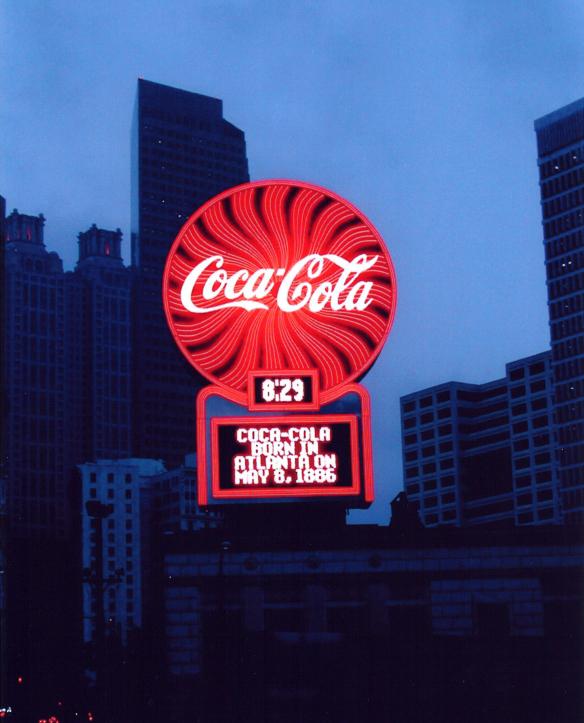 The towering sign – which spans 33 feet in diameter – overlooks the spot where the first Coca-Cola was served at Jacob’s Pharmacy in 1886, and sits just behind Woodruff Park, named for the company’s longest-standing leader, Robert Woodruff.

“It’s an iconic sign in an iconic location… thousands of people pass by it every day and expect to see this shining symbol of Coca-Cola in our hometown,” said Justine Fletcher, archivist, The Coca-Cola Company. “The sign doesn’t belong to us. It belongs to everyone who sees and experiences – whether they live in Atlanta or are visiting.”

The new sign will be lighter than the current spectacular (LED bulbs are plastic, compared to glass neon bulbs), more durable and far more energy-efficient and eco-friendly. Dimmable LED lighting will keep it illuminated 24 hours a day (neon bulbs are not dimmable and have to be turned off at night). In addition, a full-color, interactive digital display will replace the current lighted message board beneath the Coca-Cola disc.

Check out a few behind-the-scenes photos of the sign renovation:

“It will be an even bigger and more valuable marketing asset for us,” Fletcher added. “We will be able to share our brand advertising and company messaging in crystal-clear resolution on a prime piece of Atlanta real estate.”

Coke is partnering with Douglasville, Ga.-based DeNyse Companies to build, install and operate the new sign. DeNyse – which has created digital signage for the World of Coca-Cola and the company’s global headquarters – will monitor the LED bulbs remotely and dispatch repair teams within 24 hours of an outage.

Signs of the Times

Coca-Cola signage has been a meeting point for Atlanta for nearly 90 years. From 1932 to 1981, a Coca-Cola sign hung in Margaret Mitchell Square at the intersection of Peachtree Street and Pryor Street. It became a well-known landmark for downtown Atlanta, even serving as the backdrop to annual New Year's Eve celebrations.

The sign underwent various upgrades and changes. The original was a three-part sign featuring a 9-ft.-tall neon trademark, a billboard that changed out monthly and an electric sign using light bulbs to create letters relaying current events. It was replaced in 1938 with one that displayed snowflakes, raindrops, clouds or sunrays to forecast the next day's weather. 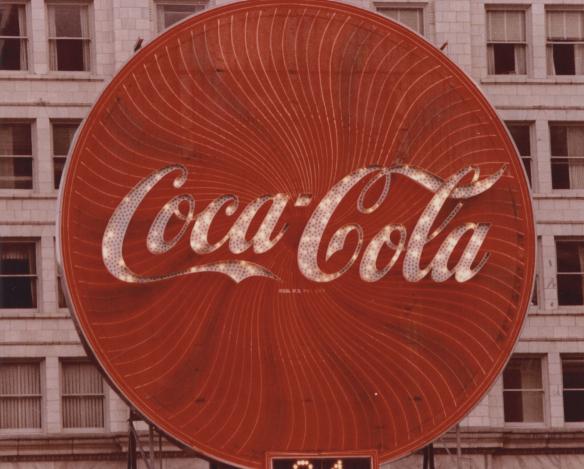 In 1948, a Coca-Cola 'Neon Spectacular' sign went up in Margaret Mitchell Square, at the intersection of Peachtree Street and Pryor Street

In 1948, work was completed on a 48-ft.-tall, 33-ft.-wide Coca-Cola "Neon Spectacular" sign featuring a 28-ft.-wide logo and 44-ft.-tall thermometer (the first of its kind). The current Five Points sign – and its in-the-works replacement – mirror the retro design anchored by the Coca-Cola red disc featured in this original “spectacular.”

The Atlanta sign is among several Coca-Cola Neon Spectacular signs prominently displayed in highly trafficked locations in some of the world’s largest cities, including Piccadilly Circus in London and Times Square in New York.