Coca-Cola Teams Up With Bill Nye to Demystify Recycling

Coca-Cola Teams Up With Bill Nye to Demystify Recycling

The Coca-Cola Company breaks down the ins-and-outs of plastic recycling to demystify the process in a new animated film narrated by science icon Bill Nye.

Mackinnon & Saunders, the award-winning animators and puppeteers behind Fantastic Mr. Fox, Corpse Bride and more, created the stop-motion film featuring an animated—and recycled—likeness of Nye who explains the end-to-end recycling process. With Nye narrating in his signature, straightforward style, the film takes viewers on the circular journey of a plastic bottle, starting from the time it’s placed in a recycling bin to returning to the shelf as a 100% recycled bottle (excluding cap and label).

“As we know, we need to reuse plastic," says Bill Nye. “That’s why I’m partnering with The Coca-Cola Company to show the science behind the process of recycling and how we can continue to address the global plastic waste crisis, together.”

While roughly 59% of Americans have access to curbside recycling[1], 27% of plastic bottles are currently recycled[2] in the United States.

“Recycling can be confusing for consumers,” said Christine Yeager, Sustainability Director, North America Operating Unit, The Coca-Cola Company. “We need to be able to articulate, in a clear, easy-to-understand way, how recycling helps drive a circular economy by using and reusing materials again and again. That brought us to the idea of using Bill’s knack for communicating about complex topics in a simple way. We wanted to make this process more digestible for consumers, so they understand the science behind recycling and hopefully feel inspired to take action with us.”

Mackinnon & Saunders shot the film in Cheshire, England, on a set made with recyclable and recycled materials. Plastic bottles, labels and cardboard were incorporated into all aspects of the production—from Nye’s puppet caricature made from cut-up plastic Coca-Cola bottles (his tie was made from a Coke label), to trees made from green Sprite labels, to conveyor belts designed from recyclable cardboard.

“We wanted to stay true to the whole ethos of recycling,” said Glenn Holberton, producer, Mackinnon & Saunders. “So, working with Production Designer Andy Farago, we built the sets and backgrounds as a model kit-of-parts, which meant we could re-dress set elements for multiple shots, making use of them as much as possible.” 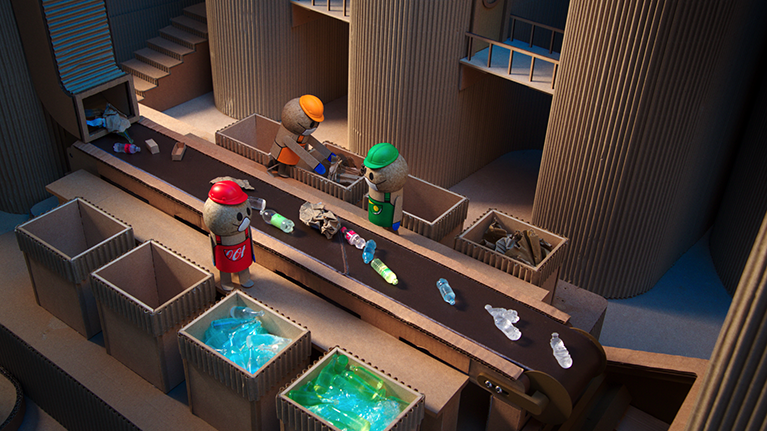 Director Mole Hill added, “Through stop-motion animation, we took an engaging, direct and fun approach to getting across the message that plastic bottles are designed to be easily recycled and come back around in a closed-loop process.”

The film, which debuted at the start of Earth Month, complements The Coca-Cola Company’s “Recycle and Re-Enjoy It” campaign and supporting activation at the NCAA Men’s and Women’s Final Fours in New Orleans and Minneapolis. All beverage bottles and cans collected inside the host arenas were recycled so they can be repurposed into new beverage packaging thanks to a partnership between Coca-Cola North America and Circular Solutions Advisors.

The company is also reducing its use of virgin PET through a combination of bottle lightweighting and increasing its use of recycled PET packaging.

All of these activations support The Coca-Cola Company’s global World Without Waste sustainable packaging initiative to collect and recycle a bottle or can for every one it sells by 2030; make 100% of its packaging recyclable by 2025; and use at least 50% recycled material in its packaging by 2030.

[2] Source: NAPCOR: NAPCOR’S 2020 PET RECYCLING REPORT REVEALS AN 800 MILLION POUND INCREASE OF RECYCLED PET FOR END MARKET USE OVER THE PAST DECADE