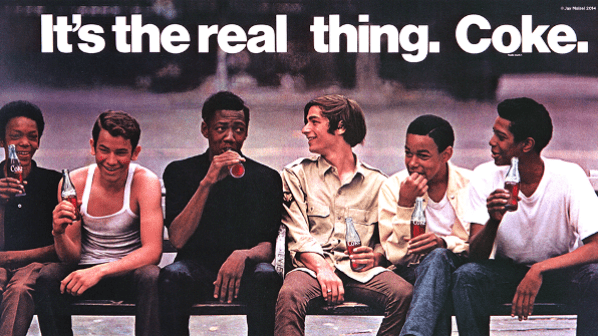 Following the Detroit race riots and tragic assassination of Dr. Martin Luther King, Jr. in the late-1960s, Coca-Cola Chairman and CEO Robert Woodruff and his marketing leadership team decided it was time to do something the company had never done before: feature African-Americans and whites together in Coca-Cola advertising.

In 1969, photographer Jay Maisel captured a group of black and white boys in New York City. In the iconic shot, which Coke used in print and TV ads in the years that followed, the teens are relaxed and happy. They’re sitting on a city bench, sharing a fun, lighthearted moment over a Coke.

When you take a closer look at the photo, you see that the boys are sitting on a segregation bench. Coke mixed things up and tackled taboo head-on. The boys are sitting shoulder to shoulder, with their arms touching across the segregation bar. The ad known simply as “Boys on a Bench” was -- and still is -- a powerful brand statement about togetherness and inclusion.

At Coke, we talk a lot about producing #workthatmatters -- storytelling with a social purpose that reflects our flagship brand’s relentlessly optimistic point of view and commitment to building a better world. This legacy, which predates "Boys on a Bench," lives on in our creative communications.