Choosing an Honest beverage may seem like a relatively simple decision.

But the seemingly small action of reaching for a bottle of Honest Tea or a multipack of Honest Kids juice drink pouches can actually make a big impact – not only in the wellbeing of those who enjoy these delicious lower- or no-sugar organic beverages, but also in the lives and communities of the supplier farmers who help produce them.

That’s the message behind Honest’s new “small decision. BIG impact” campaign, which showcases the brand’s purpose-driven DNA and longstanding mission to democratize organics and promote economic opportunity – as well as its expanding portfolio.

“We’re witnessing the rise of the citizen consumer,” said Honest Co-Founder and TeaEO Emeritus Seth Goldman. “People today want to express the power they have to vote with their wallets by supporting brands they respect and trust, and that share their values. They also want to feel like they’re making a difference, but don’t always believe the many everyday choices they make actually count. This campaign reminds them that every time they choose to drink an Honest beverage, they’re choosing to make an impact.”

A series of short films uses beautifully handcrafted, stop-motion animation to bring to life Honest’s Fair Trade Certified™ ingredient sourcing practices and show how they benefit farming communities. They also will highlight the fact that Honest Kids has half the sugar of leading kids’ juice drinks and are sweetened only with fruit juice.

The creative will run on streaming media platforms, and additional social and digital content will extend the #smalldecisionbigimpact message across Honest’s channels.

“Our ‘small decision. BIG impact.’ campaign gives Honest the opportunity to talk about the breadth of our portfolio – from bottled teas to organic youth juice drinks to lemonades and beyond,” said Clare Verdery, general manager of the Honest brand. “We’re showing consumers how their small choice of an Honest beverage – no matter which one it is – can create a ripple effect of change.”

Since 2005, Honest has contributed more than $2.5 million in Fair Trade premiums that have been reinvested back into supplier communities to provide clean water, school supplies, tuition, bicycles, healthcare, farming equipment and much more. Many premium funds support farmer education initiatives such as professional management programs and technical/agricultural training. Communities vote on how to spend these funds based on need. 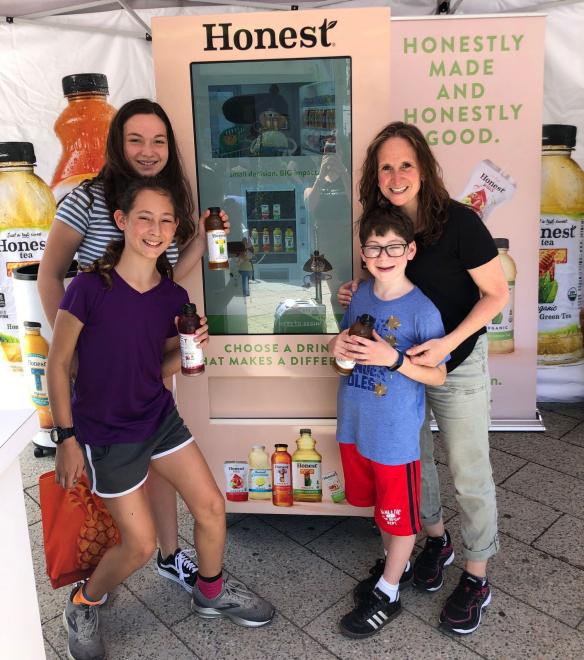 A family checks out the Honest ‘Up Your Impact’ vending machine at Chelsea Piers in New York City.

Up Your Impact
Honest also is installing immersive vending machines in its hometown of Bethesda, Md., plus New York City, Philadelphia and Los Angeles, to further demonstrate the impact people can have just by choosing an Honest beverage. Consumers who stop by one of the machines from July 16 through Aug. 30 can learn about the projects Honest’s partners at Fair Trade USA™ and Organic Farming Research Foundation support, vote which ones they think provides the biggest impact, and have the opportunity to “up their impact” and donate a tad more by increasing their transaction amount. All proceeds from sales of Honest Tea at these machines will be donated to Fair Trade USA, and all proceeds from sale of Honest Kids will support the Organic Farming Research Foundation.

“Research shows that most of our consumers don’t fully understand how the fair trade model works,” Goldman said. “By featuring real examples of what Fair Trade Community Development Funds have supported – such as new bicycles and school roofs – we’re able to demonstrate the process and its impact in a simple, tangible way.”

The campaign also “connects the dots” across the full Honest portfolio, Goldman added, and positions Honest as an organic “masterbrand” with something for everyone.

Honest’s partnership with Coca-Cola has expanded distribution of its organic products to more than 150,000 retail and foodservice locations across the United States, and more than 40 European countries. “It’s so exciting to see the brand flourish in international markets and not only get such a warm welcome overseas,” Goldman concluded, “but also to see Coke’s continued adoption of Honest as a platform for organics.”