New Coke cans roll off a production line near Atlanta earlier this month. On Thursday May 23, Coca-Cola will release a limited number of New Coke cans online as part of a partnership with the hit Netflix show Stranger Things.

That’s right, the ill-fated brand considered by many to be one of the biggest-ever marketing mishaps is making a brief comeback this summer for a (very) limited promotional run through a first-of-its-kind partnership between Coca-Cola and Netflix's Stranger Things.

Beyond appearing prominently on screen throughout Stranger Things Season 3, New Coke will be available in the “real world” beginning Thursday, May 23, at 5 p.m. ET, when Coca-Cola will release a limited number of 12-oz. cans of New Coke – yes, the same recipe from 1985 – as part of a bundle when shoppers buy at least two limited-edition Stranger Things Coca-Cola or Coke Zero Sugar 8-oz. glass bottles at CokeStore.com/1985.

A cinema ad directed by the Duffer Brothers will feature Stranger Things characters enjoying New Coke at a movie theatre.

The idea for the 2019 limited run of New Coke started when Netflix contacted Coca-Cola’s North America marketing team last year with news that the next season of Stranger Things would take place in the summer of 1985, and that they wanted to authentically incorporate New Coke into the storyline.

“When Netflix told us Season 3 was going to be set in the summer of 1985 – with the tagline that ‘one summer could change everything’ – that rang so true for us,” said Oana Vlad, director of Coca-Cola Trademark, Coca-Cola North America. “The summer of 1985 did in fact change everything for us with the introduction of New Coke, which was also arguably one of the biggest pop culture moments of that year.”

Coca-Cola invited Netflix to visit the Coca-Cola archives in Atlanta to study New Coke packaging, memorabilia, advertising and more to ensure the Stranger Things script accurately reflected historical events and that all props and visuals stayed true to the time period.

As Vlad and her colleagues started to see how prominently the brand would feature in the Stranger Things narrative, they decided to go “all in” and resurrect the dormant drink.

“Ultimately, we looked around the room and said, ‘Why wouldn’t we do this?’” Vlad recalled. “No one would have ever thought we’d produce New Coke again after what happened in 1985, but we all agreed that if we wanted to partner with Netflix and Stranger Things in a truly culturally relevant way that would resonate with our fans – and theirs – then we had to make the New Coke story come to life.” 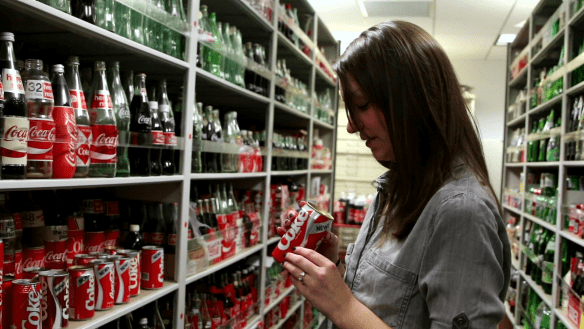 Elyse Larouere, senior designer, Coca-Cola Trademark, studies vintage New Coke packaging in the company's archives. 'There were no Adobe Illustrator files back then – and not as much printing standardization – so we had to start the design process from scratch,' she said.

Elyse Larouere, senior designer, Coca-Cola Trademark, studies vintage New Coke packaging in the company's archives. 'There were no Adobe Illustrator files back then – and not as much printing standardization – so we had to start the design process from scratch,' she said.

Back to the Future

For the Coca-Cola North America design team, the journey back to 1985 meant exploring the archives for vintage New Coke cans and other analog documentation.

“There were no Adobe Illustrator files back then – and not as much printing standardization – so we had to start the design process from scratch,” recalls Elyse Larouere, senior designer, Coca-Cola Trademark.

Larouere and her team took steps to preserve the original New Coke aesthetic, meticulously recreating the logo and mimicking the slightly different Coke red used more than three decades ago.

“We wanted to honor both our heritage and the Duffer Brothers’ commitment to authenticity,” she added. “Stranger Things fans love the nostalgic vibe of the show, so to be able to bring New Coke back to life in a physical way takes the experience to another level. We hope people who remember New Coke can relive those memories, and those like me who weren’t alive in 1985 can appreciate the fact that a show that honors cultural icons of the time is honoring this one.” 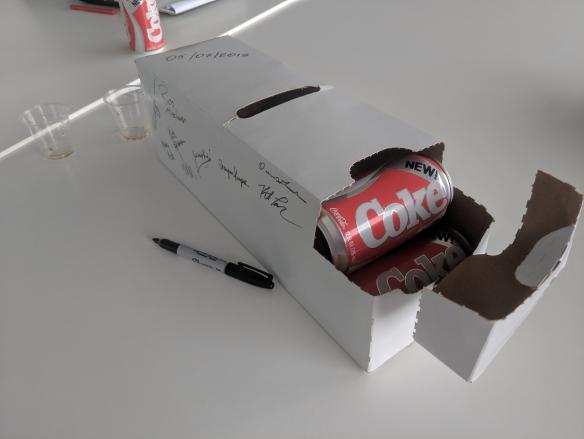 Designers, marketers and engineers who collaborated over six months on the top-secret 'Project Revival' signed an unmarked batch of New Coke.

Designers, marketers and engineers who collaborated over six months on the top-secret 'Project Revival' signed an unmarked batch of New Coke.

“Project Revival” as it was dubbed internally required far more than a graphics change, however. The company wanted to give fans the chance to see, touch and taste New Coke, which meant the R&D and supply chain commercialization teams had to do some detective work of their own.

“We had to first retrieve the New Coke recipe that has been protected in our safe over the years,” said Michael Burdett, principal scientist, global category development, The Coca-Cola Company. From there, Burdett worked to source all ingredients and approvals to produce New Coke concentrate and, ultimately, the finished product at an Atlanta-area Coca-Cola bottling plant.

Peter Shoemaker, director of sparkling category commercialization, Coca-Cola North America, was responsible for coordinating the production and packaging process with several stakeholders throughout the Coke system.

“All told, everything took about six months and was top secret,” he said. “Most people on my team didn’t even know about it.”

Burdett said the project shows how far the company’s culture has come in recent years. “One of our growth behaviors is celebrating and learning from failure, and New Coke – for better or worse – is known as a failure,” he said. “Bringing it back in a fun, creative way to support the Stranger Things partnership shows we don’t take ourselves too seriously.” 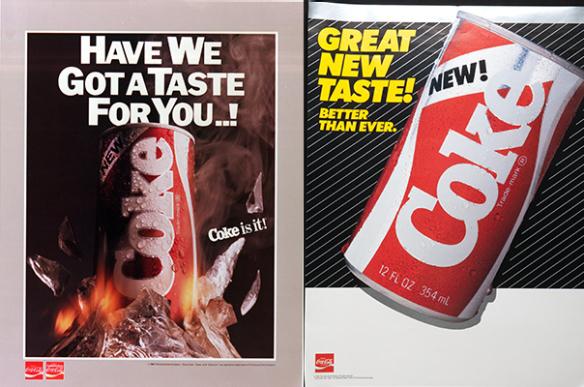 On April 23, 1985, Coca-Cola made the now-infamous decision to replace the secret formula of its flagship brand. The New Coke rollout, which some called the business blunder of the century and others declared an unintended stroke of marketing genius, unleashed an avalanche of calls, letters, protests and bad press.

Pre-launch research showed that Americans preferred the taste of New Coke over the then 99-year-old original. But what the tests didn't reveal was the emotional bond Americans felt with their Coca-Cola. When New Coke hit the market, loyalist clubs and protest groups formed almost overnight, and consumers from coast to coast hoarded and even scalped cases of “old” Coke.

“The passion for original Coke was something that just flat caught us by surprise,” Don Keough, then president and chief operating officer of The Coca-Cola Company, humbly admitted on July 11, 1985 during a televised press conference announcing the return of classic Coke.

Sales of the original Coca-Cola surged in the months to follow, restoring the brand as the frontrunner in the ongoing cola wars and affirming a truth countless marketers continue to learn and relearn in the social media era – that consumers, not companies, own the world’s most cherished brands.

“New Coke taught us that our fans are extremely passionate about our brand and great taste,” Vlad said. “That passion has helped propel Coke to the iconic brand it is today and encourages us to continue to do big things to connect with our fans. It’s not about a ‘mistake’… it’s what we learned and the incredible cultural resonance of Coca-Cola.”