Rising to the Challenge

When Coca-Cola India was challenged with keeping smaller-sized products fresh and affordable, Coca-Cola’s innovators created what may be the lightest bottle in the world for fully carbonated products, the “Affordable Small Sparkling Package” (ASSP). The solution was a 250-milliliter plastic bottle that maintains aesthetic appeal and the imperative product quality protections needed for bottles to travel long distances to reach consumers in rural areas and often extreme tropical temperatures. It is also helping the company reduce its carbon footprint.

The ‘affordable’ part of the bottle’s name relates to a historic hindrance: The product cost of bottles made specifically to reduce carbonation loss typically increases very quickly due to an increased amount of plastic in bottle walls. And normally, the smaller the sparkling bottle is, the greater the carbonation loss.

However, a new approach was taken to deliver a higher-performing, lower-cost bottle. 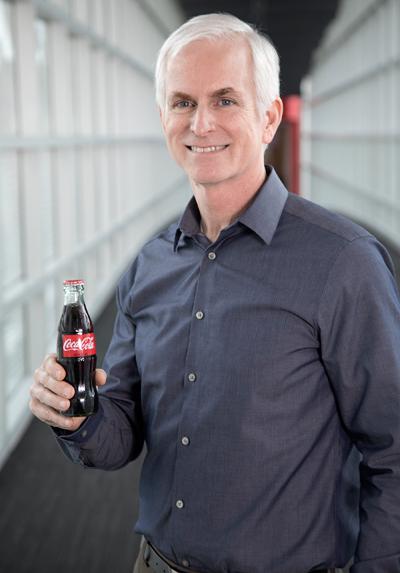 The ASSP, which was introduced in 2016 and weighs less than 10 grams, took nearly two years to create. Proprietary Coca-Cola computer simulation methods were used to design the package using one-third less plastic than a standard plastic bottle in India (wt. 15.5 gm) and an incredibly thin barrier layer was added to the bottle walls to prevent carbonation from escaping. When combined, these two advances extend product shelf life by a remarkable five months or more. This innovative technology can be used to reduce plastic usage in the production of plastic bottles for sparkling products up to 40 percent as compared to the production of a standard plastic bottle, in some cases. The improved design does not compromise recyclability, meaningful to Coca-Cola as it works to fulfill its vision of a World Without Waste.

Scott Pearson, Ph.D., Senior Director Global R&D Engineering, The Coca-Cola Company, and his team of dedicated engineers developed the ASSP and won a 2017 Coca-Cola Global Innovation Award for its inventive design and capabilities.

“The fact that Coca-Cola recognizes innovation is really an important statement,” said Pearson. “We’re empowered to test and learn, stretch our imaginations and try new ideas. That freedom can lead to great things, which is what happened with the ASSP. Our creative and dedicated team constructed one of the lightest-weight, highest performing, lowest cost sparkling plastic bottles that we’re aware of, and it’s exciting to dream about what we’ll come up with next.”

The ASSP has experienced great success in India, outperforming counterparts and paving the way for growth for the Coca-Cola brand in certain markets. Positive reception led Hindustan Coca-Cola Beverages, The Coca-Cola Company’s largest bottling partner  in India, to install an additional production line for the bottle in 2017, increasing production capacity and extending the smaller bottle to all brands, including Coca-Cola, Sprite, Fanta and local favorites Thums Up and Limca. Two more high speed production lines are being commissioned and will begin production later in 2018.

To date, more than 493 million bottles of ASSP have been produced in India, giving people the drinks they want and how they want them, increasing company revenue and helping reduce the company’s carbon footprint. The increase of ASSP production has led to a significant reduction of carbon emissions that otherwise would have been generated by production of standard plastic bottles.

In 2017, ASSP was available in eight of India’s states: Tamil Nadu, Kerala, Karnataka, Andhra Pradesh, Gujarat, Maharashtra, Goa and Rajasthan. Coca-Cola is planning to continue to expand the availability of the ASSP throughout India in 2018.

Recognizing the success of the ASSP in India, Coca-Cola Amatil, one of the company's largest bottling partners in the Asia-Pacific region, commissioned an ASSP production line in Indonesia March 2017, launching Coca-Cola, Fanta and Sprite in a 250 milliliter ASSP bottle. The ASSP packs replaced an existing 250 milliliter bottle that used considerably more plastic resin per liter of product, particularly important in a country confronting significant waste prevention and management issues.

In 2017, Coca-Cola Amatil sold 100 million bottles of product delivered via ASSPs, saving an estimated 980,000 kilograms of plastic resin. Sales of the smaller, carbonated bottle continue to grow in Indonesia.

Other markets are planning to incorporate the ASSP into production. The commercial success Coca-Cola is experiencing from the innovative ASSP is helping drive growth and improve environmental impacts, a great example of how the company is executing its plan to grow with conscience.