To mark the one-month countdown to the FIFA Women’s World Cup France 2019™, Coca-Cola is convening six of football’s most elite women’s players to help inspire the next generation of female athletes.

#TeamCocaCola is an international group of players, each of whom demonstrates an unwavering passion for football and shares a common goal with Coca-Cola: to empower women across the globe. A series of short films launching today profiles each member of Team Coca-Cola, highlighting their journey to the FIFA Women’s World Cup France 2019 and the obstacles they faced along the way:

Sara Däbritz (Germany): Sara is a midfielder for the German national team, and competed in the 2016 Summer Olympics where Germany won the gold medal. Competing in the FIFA Women’s World Cup is a dream come true for Sara, who has been playing football since she was five years old.

Abby Dahlkemper (USA): Abby is a central defender for U.S. women’s national soccer team, the reigning world champions. After overcoming an infection that put her career at risk, her love for the game of football is stronger than ever as she prepares for the tournament.

Debinha (Brazil): Debinha is a forward for the Brazil national team. After years of fighting for gender equality in football, she is proud to play the game she loves while representing her country and inspiring girls everywhere.

Grace Geyoro (France): Grace is a defensive midfielder for the French national team. Kickstarting her career in football on a local boys club team, she has overcome the odds and is excited for the future of women’s football.

Saki Kumagai (Japan): Saki is a defender and captain for the Japan national team. As part of Team Coca-Cola, she hopes to set an example for young girls everywhere and inspire them to compete in the FIFA Women’s World Cup in the future.

Desire Oparanozie (Nigeria): Desire is a forward for the Nigerian national team, and has competed in the 2011 and 2015 FIFA Women’s World Cup tournaments. Passionate about motivating young women to be whatever and whoever they want to be, she is proud to represent her nation and hopes to be a role model for girls back home and around the world.

“It was important for us to choose team members who reflect our values, and who serve as role models,” said Jan Schetters, global football manager, The Coca-Cola Company. “Each member of Team Coca-Cola has unique backgrounds that demonstrate their commitment to furthering the game of women’s football.” 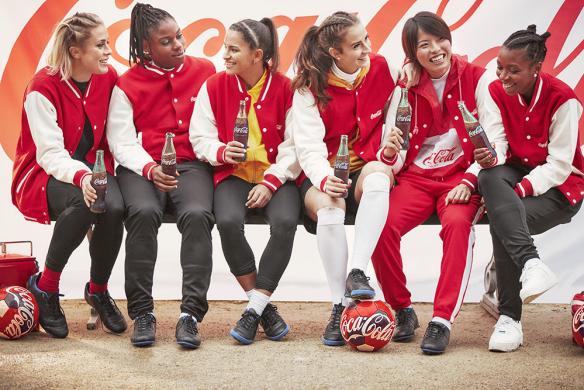 These six athletes, the first of many #TeamCocaCola members who will join the Coke family throughout the Tokyo 2020 Olympic Games, will be featured across Coke’s social and digital media, in-store promotions and more.

Coca-Cola is partnering with the FIFA Fan Movement to help football fans around the world send their favorite players messages of support using the hashtag #MessageAStar. The messages, which will be collected and reviewed by the FIFA Fan Movement team, will have the chance to be shared during the tournament via in-stadium displays, social content and even physical notes delivered to players. Messages qualify to win epic prizes like player meet-and-greets in France or the players’ home countries, signed footballs and more.

In the U.S., Coca-Cola is encouraging fans across the country to rally together in support of the U.S. Women’s National Team (USWNT) with the limited-edition Coca-Cola Believe Wristband created from the red goal nets of the 2019 SheBelieves Cup. While supplies last, fans can get a limited-edition Coca-Cola Believe Wristband by scanning the “I Believe” wristband found on a 20-oz. bottle or attending a USWNT sendoff series match. Coca-Cola shared the first Believe Wristbands with members of a teen girls soccer team from Orlando City Soccer Club, giving the athletes a once-in-a-lifetime opportunity to get up-close-and-personal with the USWNT. 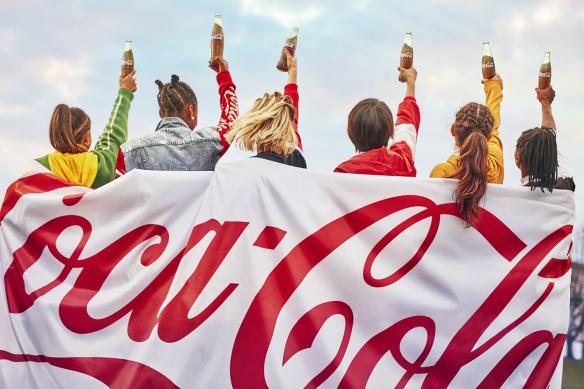 Coca-Cola has supported every FIFA Women’s World Cup since the inaugural tournament in 1991. “With more than 4 billion fans across the globe, we’ve seen time and time again that football is the most popular sport in the world, and brings people together from all backgrounds and walks of life,” said Schetters. “As a returning partner, we’re looking forward to putting elite women's footballers in the spotlight and telling their stories on and off the field.”

Coca-Cola has a longstanding history of championing women in sports, both on and off the field. Alice Coachman became the first female athlete sponsored by Coca-Cola following the 1948 Olympic Games, making her the first African-American woman to earn an endorsement deal. The brand has partnered with some of the world’s top female athletes in recent years, including Simone Biles, Missy Franklin and Michelle Kwan. In 2011, Coca-Cola kicked off a partnership with Alex Morgan, making her the first female football player to be sponsored by Coca-Cola. Ahead of the London 2012 Summer Olympics, Morgan was selected as a member of the Coca-Cola “Eight-Pack”, a group of Team USA ambassadors sponsored by the brand. At the time, she was the youngest member of the U.S. Women’s National Soccer Team.