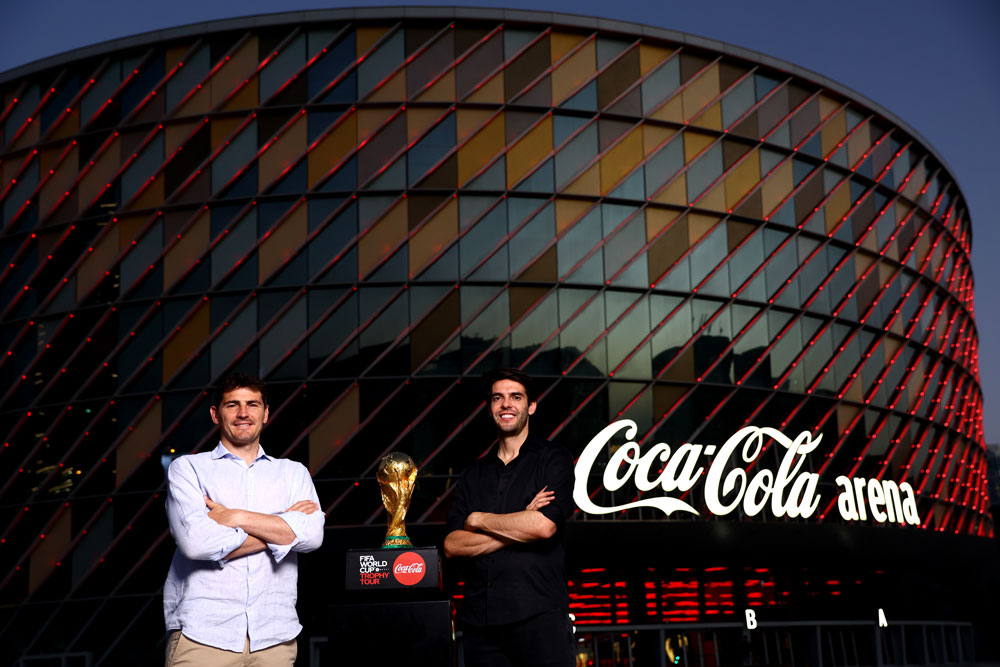 Original FIFA World Cup™ Trophy unveiled at Dubai’s Coca-Cola Arena before it embarks on its fifth journey, travelling to 51 countries and territories

“As football fans around the world gear up to support their teams, Coca-Cola is thrilled to offer fans the opportunity to experience the trophy ahead of the tournament,” said Brad Ross, Vice President of Global Sports & Entertainment Marketing and Partnerships at The Coca-Cola Company. “The real magic of the FIFA World Cup exists with fans believing in their teams and showcasing their passion for the game.”

Starting today, Coca-Cola is inviting fans to a once-in-a-lifetime opportunity to see the most recognised symbol in football and experience the real magic of the world’s largest and most anticipated single-sport event – the FIFA World Cup™.

The FIFA World Cup™ Trophy Tour by Coca-Cola will stop in 51 countries and territories, bringing Coca-Cola and FIFA one step closer to the goal of visiting each of FIFA’s 211 member associations by 2030. For the first time ever, the tour will visit all 32 countries that qualified for the FIFA World Cup™, inspiring fans across the world through exclusive consumer experiences.

“The FIFA World Cup Trophy is one of the greatest symbols in sport,” said Romy Gai, FIFA’s Chief Business Officer. “Bringing it on tour gives us a unique opportunity to shine a spotlight on the fantastic communities around the world who love the beautiful game. The trophy tour – which will end back in Qatar, our amazing hosts – highlights our commitment to making football truly global as we realise the dreams of our fans and bring the joy and excitement of the FIFA World Cup to their doorsteps, together with our long-standing partner Coca-Cola.”

FIFA World Cup™ winners Iker Casillas and Kaká shared their passion for the game at the first stop event in Dubai.

Kaká said: “It is an incredible honour to be part of the first stop of the FIFA World Cup Trophy Tour by Coca-Cola. My first FIFA World Cup as a player was when I was just 20 years old, and it is still fresh in my mind – for me, it was a dream come true.”

Added Iker Casillas: “It was the highlight of my career when I lifted this very trophy as captain of Spain in 2010. And it is exciting that someone will have that feeling in Qatar later this year. It fills me with great pride to join all of you today, as we kick off the journey of the FIFA World Cup Trophy, bringing it to the fans across the globe.”

The FIFA World Cup™ Trophy Tour by Coca-Cola has a mission to support the development of sustainability efforts at each location visited by the tour. For the first time, consumer activations will be digitally led by Coca-Cola, reducing waste at each stop on the tour and minimising the consumption of water, energy, materials and other resources.

The Coca-Cola Company has had a long-standing relationship with FIFA since 1976 and has been an official FIFA World Cup™ Sponsor since 1978.  Coca-Cola has had stadium advertising at every FIFA World Cup™ since 1950 and is a long-time supporter of football at all levels.

About the FIFA World Cup™ Trophy

The Coca-Cola Company (NYSE: KO) is a total beverage company with products sold in more than 200 countries and territories. Our company’s purpose is to refresh the world and make a difference. We sell multiple billion-dollar brands across several beverage categories worldwide. Our portfolio of sparkling soft drink brands includes Coca-Cola, Sprite and Fanta. Our hydration, sports, coffee and tea brands include Dasani, SmartWater, vitaminwater, Topo Chico, BODYARMOR, Powerade, Costa, Georgia, Gold Peak, Honest and Ayataka. Our nutrition, juice, dairy and plant-based beverage brands include Minute Maid, Simply, innocent, Del Valle, fairlife and AdeS. We’re constantly transforming our portfolio, from reducing sugar in our drinks to bringing innovative new products to market. We seek to positively impact people’s lives, communities and the planet through water replenishment, packaging recycling, sustainable sourcing practices and carbon emissions reductions across our value chain. Together with our bottling partners, we employ more than 700,000 people, helping bring economic opportunity to local communities worldwide. Learn more at www.coca-colacompany.com and follow us on Twitter, Instagram, Facebook and LinkedIn.