Coca-Cola today announced an industry-first goal to collect and recycle the equivalent of every bottle or can it sells globally by 2030.

The company and its global network of bottling partners will tackle the ambitious goal, which is part of a holistic plan called “World Without Waste,” through a renewed focus on the entire packaging lifecycle – from how bottles and cans are designed and made, to how they’re recycled and repurposed.

“Consumers around the world care about our planet. They want and expect companies like ours to be leaders and help make a litter-free world possible,” said James Quincey, president and CEO, The Coca-Cola Company. “Through our ‘World Without Waste’ vision, we are investing in our planet and in in our packaging to help make the world’s packaging problem a thing of the past.”

Quincey, who heads to Davos, Switzerland next week for the World Economic Forum (WEF) annual meeting, said the company will continue to focus on developing 100-percent recyclable packaging and reducing the amount of plastic in its bottles.

The company’s "World Without Waste" vision is the next step in a broader strategy to grow with conscience by doing business the right way, not just the easy way.

To that end, Coca-Cola announced in 2016 that it was the first Fortune 500 company to give back to nature and communities an estimated 115 percent of the water used to make its drinks. The company and its bottling partners achieved the target five years ahead of schedule.

Further, in 2009, Coca-Cola introduced fully recyclable PlantBottle packaging made from up to 30 percent plant-based materials.

“And we don’t intend to stop there,” Quincey said.

To help improve recycling rates, Coke will apply its global marketing muscle to help educate the public on what, how and where to recycle. The company also will continue to team with local communities, NGOs, industry peers and consumers to help make recycling easier and more accessible for everyone by improving local recycling systems and driving policy change that supports a truly circular economy. 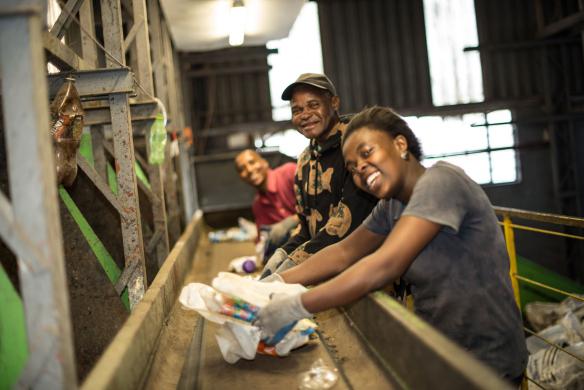 In 2002, Coca-Cola bottlers in Mexico joined the country’s plastics industry, and leaders from other industries, to create Ecology and Corporate Commitment (ECOCE), a nonprofit organization dedicated to encouraging a culture of recycling, and funded the creation of two food-grade PET plastic recycling facilities.

These investments are paying off. In 2016, Mexico recycled 57 percent of the PET plastic it produced (up from 9 percent in 2002), making it the leading country globally for PET recycling. 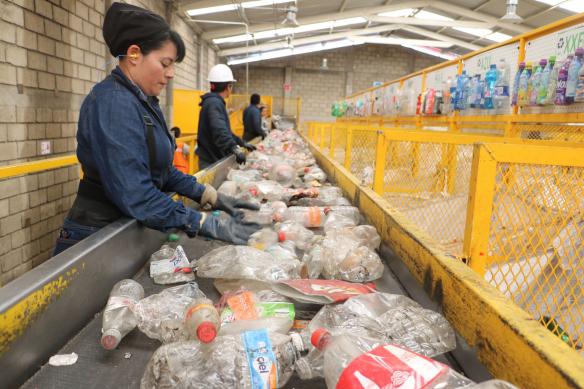 Coke’s 100 percent collection and recycling goal will primarily focus on bottles, cans, and caps made from glass, PET plastic, or aluminum – which represent approximately 85 percent of its packaging – but also includes packages produced by other companies.

“We believe every package – regardless of where it comes from – has value and life beyond its initial use,” Quincey added. “If something can be recycled, it should be recycled. So we want to help people everywhere understand how to do their part.”

In 2017, employees from Heartland Coca-Cola Bottling Co. joined with other volunteers in St. Louis to collect and sort 14,480 pounds of debris; 63 percent was diverted for recycling. Coca-Cola then partnered with manufacturer Phoenix Technologies to convert plastic bottles into recycled PET plastic for use in new bottles.

To help tackle existing packaging waste, Coca-Cola will continue to work with existing partners such as The Ocean Conservancy/Trash Free Seas Alliance, World Wildlife Fund (WWF) and the Ellen MacArthur Foundation (New Plastics Economy initiative) to support a debris-free environment. Since 1995, Coca-Cola has been the lead sponsor of the world’s largest volunteer effort benefiting the marine environment: Ocean Conservancy’s International Coastal Cleanup. Over the course of that partnership, the company has helped mobilize 20 million people to clean up 220 million pounds of trash from more than 375,000 miles of coastline.