Coca-Cola is the first company in the Netherlands and Norway to bottle its entire portfolio of locally produced beverage brands in 100% recycled polyethylene terephthalate (rPET) packaging in support of the company’s global World Without Waste strategy.

Coca-Cola currently bottles beverages in 100% rPET in 18 markets globally, a number that continues to climb during the pandemic.

The fully recyclable bottles will be used again and again as raw material for more new bottles, supporting closed-loop recycling systems and circular economies for PET. The switch to 100% rPET in the two countries will eliminate the use of more than 14,000 tons of new virgin oil-based plastic per year.

Joe Franses, vice president of sustainability for Coca-Cola European Partners (CCEP), said the transition marks an important step in the Coca-Cola system’s journey in Western Europe to eliminate virgin, oil-based plastic across its packaging within the next decade.

As part of the joint sustainability action plan, “This is Forward”, Coca-Cola Western Europe and its local bottling partners at CCEP have pledged to collect a can or bottle for every one it sells and ensure that all packaging is fully recyclable by 2025, and ensure that at least 50% of the content of its PET bottles will come from recycled content by 2023. Combined, these efforts will remove more than 200,000 tons of virgin, oil-based PET per year. 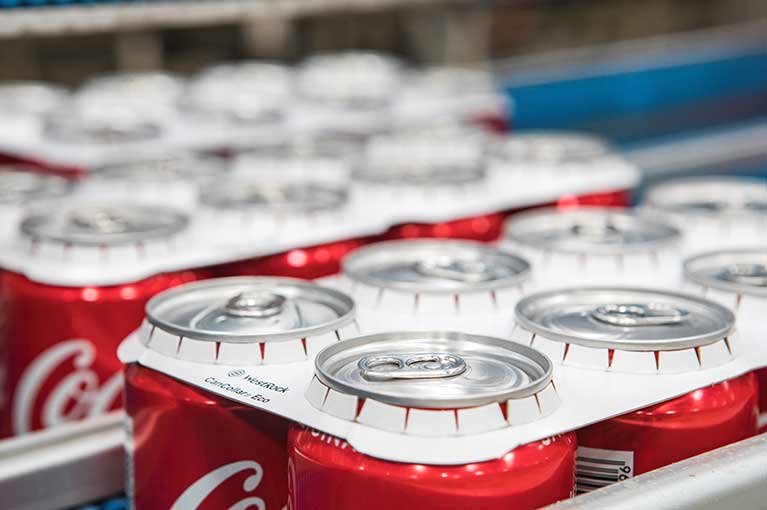 Deposit Return Schemes in Norway and the Netherlands support the switch to 100% recycled plastic material. “Crucially, this announcement provides a compelling case for the role that Deposit Return Schemes can play in the creation of local circular economies for beverage packaging,” Franses said. “Markets with well-designed schemes such as those in Sweden, the Netherlands and Norway not only have high collection rates but also have the capacity to collect a higher grade of material with less contamination.”

CCEP recently introduced CanCollar®, a paperboard packaging solution for multipack cans that is fully recyclable and potentially saves more than 18 tons of plastic annually. Developed in collaboration with Atlanta-based packaging company WestRock, CanCollar ring technology is produced from sustainable materials and uses no glue or adhesives, keeping its total carbon footprint and production cost to a minimum. The breakthrough innovation, a first for Europe, will first launch in Spain in November.