The year was 1928. Women would compete in track and field events for the first time at the Olympic Games. A symbolic flame would light a cauldron, and ignite a tradition. And a freighter carrying American athletes to Amsterdam would also bring Coca-Cola to its first Olympic Games.

History has been made many times at Olympic Games through the decades. And Coca-Cola has been there, at every host city since 1928, to see records being broken, dreams being fulfilled, and rivalries and camaraderie served up in equal parts.

The Coca-Cola Company is the longest continuous sponsor of the International Olympic Committee (IOC), and today it announced it is extending its relationship another 12 years, for a total of a historic 104 years.

But this contract signifies a new era as tradition meets innovation with the IOC’s first ever Joint TOP (The Olympic Partners) Sponsorship. The Coca-Cola Company and China Mengniu Dairy Company will co-own the non-alcoholic beverage category, with Mengniu taking the lead in an expanded dairy category.

“We are honored and privileged to be a part of the movement that makes it possible for athletes from all over the world to come together to represent their nations, pursue their dreams and be a part of history,” said James Quincey, Chairman and CEO of The Coca-Cola Company. “A lot has changed since we sold the first Coca-Cola at an Olympic event in 1928. With a fresh approach to our business and to our sponsorship, we are proud to join with Mengniu to promote and celebrate future Olympic Games.” 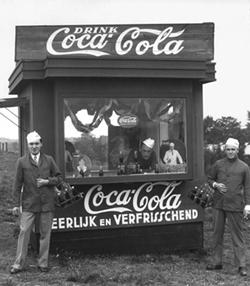 With its current IOC contract ending after the Tokyo 2020 Olympic Games, The Coca-Cola Company can now begin planning for Beijing in 2022, Paris in 2024, and in Los Angeles in 2028 – 100 years after women made history in Amsterdam. The company will be there for the 2026 and 2032 Olympic Games – in cities that have yet to be named.

“We’ve been a part of bringing so many incredible moments to Olympic Games fans over the years – moments that have been inspired by the pursuit of excellence, the possibility of opportunities, the spirit of competition, and a vision for a better world,’ said Bea Perez, Chief Public Affairs, Communications, Sustainability and Marketing Assets Officer for The Coca-Cola Company, “With the past 90 years as our foundation, we can’t help but be excited for what the future holds.”