In April 2016, Heartland Coca-Cola became just the third new, independent bottler to join the Coca-Cola family in recent decades. Heartland’s operations span most of Kansas, a significant portion of Missouri, a little over half of Illinois and a small part of Nebraska. The company, its Lenexa, Kansas production plant, and its 18 regional distribution centers are run by the family duo of Junior Bridgeman and his son, Justin.

Junior’s interest in the Coca-Cola business dates back to his days as an NBA basketball player. One year during his time with the Milwaukee Bucks, he was trying to find a corporate sponsor for a free summer camp he was organizing.

“We immediately thought of Coca-Cola,” he recalls. “So we went to the local bottler in Milwaukee and asked him if he would get involved and help us.”

“And without hesitation, he said ‘Yes, of course!’”

Coke’s commitment to the community was impressive, but a tour of the bottler warehouse and distribution facility piqued his interest as an investor and businessman.

“I was amazed to walk around and see stacks and stacks of beverages, and the trucks rolling in,” he said. “It just seemed like a fun environment and something I think was always in the back of my mind.”

Junior is now the president and CEO of Coca-Cola Heartland. And despite standing tall at 6’5”, he refuses to lead from anywhere but below. In describing his leadership style, he talks of an inverted pyramid with leaders at the bottom and customers at the top.

“I am the least important person here,” Junior says. “Everybody that makes everything happen day-to-day, all the way up to the customers, that’s who is really important. I am just here to support and figure out how to make what they do better, easier and fun.” 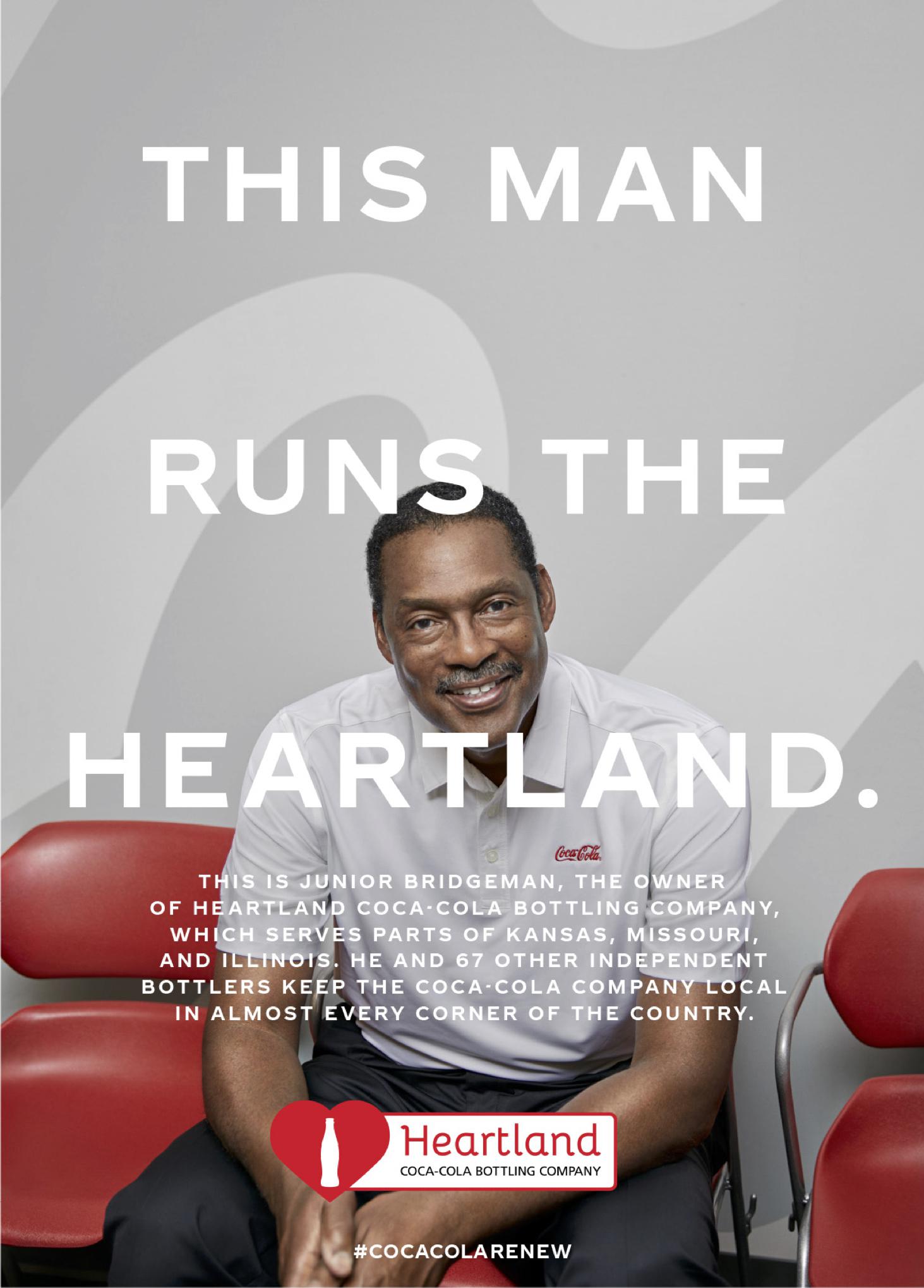 Junior’s team ethos drives him to make Heartland work—not only as part of the larger Coca-Cola ecosystem, but also for the people and communities his business serves.

“When I first came here, I would see on the walls the jerseys of people who had been with Coca-Cola for 35, 40, 45 years, given their lives to this brand,” Junior continued. “That was an awakening for me. I did not anticipate how deep it runs inside all the people that work here in Heartland Coca-Cola.”

Since joining the company last year, Bridgeman has made a point to meet with mayors, council people and other local businesses—not just in Kansas City and St. Louis, but in smaller communities as well.

“We want to talk about what they have going on in their communities and how we can help. We will take all of their ideas and then figure out what we can do to make an impact, to get more involved, to make a difference in what’s going on. It’s not what can Coca-Cola Heartland do, but rather what can they do with our help.”

Among the organizations Heartland supports are Crittenton Children’s Center at St. Luke’s Hospital in Kansas City and the Crisis Nursery and St. Patrick Center in St. Louis. Bridgeman has also personally supported the founding of several basketball camps and a Louisville boys’ school for children that were homeless.