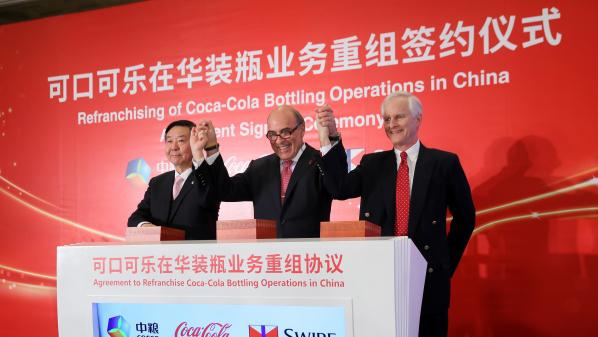 Zhao Shuanglian, Chairman of COFCO Corporation, Muhtar Kent, Chairman and CEO of The Coca-Cola Company, and John Slosar, Chairman of Swire Pacific Limited, commemorate the completion of a definitive agreement to refranchise bottling operations in China. The transaction will result in a divide of the Coca-Cola’s bottling system in China between the two franchise partners – COFCO and Swire.

BEIJING, CHINA, 19 November 2016 – The Coca-Cola Company, together with its three main bottling groups in China - Coca-Cola Bottling Investments Group China (“BIG”), COFCO Coca-Cola Beverages Limited (a subsidiary of COFCO Corporation, “COFCO”) and Swire Beverages Holdings Limited (“Swire”) – today commemorated the completion of a definitive agreement to refranchise all existing Company-owned bottling operations in China. The transaction will result in a divide of the Coca-Cola’s bottling system in China between the two franchise partners – COFCO and Swire.

“This announcement marks the latest important chapter in the ongoing transformation of our business to refocus on our core strengths of building great brands and leading a strong, global franchise system,” said Muhtar Kent, Chairman and CEO, The Coca-Cola Company. “By refranchising all our Company-owned bottling operations in China to strong local partners, we position these companies to leverage greater scale, capability and efficiency throughout China to invest for growth and deliver improved service to customers and consumers in a fast-changing marketplace. We remain excited about our long-term growth prospects in China and see today’s announcement as a key milestone in our nearly three decades of continuous investment in the world’s second-largest economy.”

“This transaction marks a new milestone in the history of COFCO and Coca-Cola cooperation, and opens a new era of two franchise partners bisecting Coca-Cola’s marketplace in China,” said ZHAO Shuanglian, Chairman, COFCO Corporation. “Global refranchising, refocusing on brands and markets are strategic decisions in Coca-Cola’s century-long history, and coincide with COFCO’s long-term vision of improving quality and efficiency, and building a market-oriented, specialized modern enterprise. China’s long and stable economic growth provides great opportunity for sustainable development of the beverages industry. And the scale effect, regional synergy and cost optimization that the new initiative brings will certainly boost Coca-Cola and its partners to achieve a new leap forward in China. The future is set by what we decide and act on today. I believe this restructure will create greater value for shareholders and society.”

John Slosar, Chairman of Swire Pacific Limited, said: “We are happy to sign an agreement that will lead to a stronger, more efficient Coca-Cola bottling system in China. We remain very optimistic about the long-term growth prospects for our beverages business in China, and we are convinced that this realignment will optimize the Coca-Cola system, accelerating growth and enabling us to win in the market. Swire Beverages has been a strategic partner with Coca-Cola for over 50 years. Today we are one of the largest Coca-Cola bottlers in the world, with significant franchise territories in Mainland China, the USA, Hong Kong and Taiwan. This realignment is testament to our commitment to our long-term strategic relationship with The Coca-Cola Company.”

Kent also noted that this announcement demonstrates the important strategic role that the Company’s Bottling Investments Group (BIG) has played in strengthening bottling operations in key growth markets like China. “This transaction demonstrates BIG’s role in supporting long-term investment and building the right culture to ensure a sustainable healthy business,” Kent said. “BIG’s ownership of bottling operations in China was a transitional process that allowed us to position the system for long-term sustainable growth, now under the leadership of strong local partners.”

As Coca-Cola’s third-largest market by volume, China represents a significant long-term growth opportunity for The Coca-Cola Company and its bottling system. The Coca-Cola system in China is currently investing $4 billion locally for future growth from 2015 to 2017, building on $9 billion of investments made in the market since 1979. In February 2016, The Coca-Cola Company announced a non-binding letter of intent to negotiate the refranchising of its bottling operations with existing partners, COFCO and Swire. When the transaction is complete, COFCO will own and operate 18 bottling plants, and Swire will own and operate 17 in Mainland China.

The China transaction remains subject to regulatory approvals from relevant government authorities. Until the transaction closes, all bottling plants and customer relationships will continue to operate as normal under current bottling ownership.

About The Coca-Cola Company
The Coca-Cola Company (NYSE: KO) is the world's largest beverage company, refreshing consumers with more than 500 sparkling and still brands and more than 3,800 beverage choices. Led by Coca-Cola, one of the world's most valuable and recognizable brands, our company’s portfolio features 20 billion-dollar brands, 18 of which are available in reduced-, low- or no-calorie options. Our billion-dollar brands include Diet Coke, Coca-Cola Zero, Fanta, Sprite, Dasani, vitaminwater, Powerade, Minute Maid, Simply, Del Valle, Georgia and Gold Peak. Through the world's largest beverage distribution system, we are the No. 1 provider of both sparkling and still beverages. More than 1.9 billion servings of our beverages are enjoyed by consumers in more than 200 countries each day. With an enduring commitment to building sustainable communities, our company is focused on initiatives that reduce our environmental footprint, create a safe, inclusive work environment for our associates, and enhance the economic development of the communities where we operate. Together with our bottling partners, we rank among the world's top 10 private employers with more than 700,000 system associates. For more information, visit www.coca-colacompany.com, follow us on Twitter at twitter.com/CocaColaCo, or find us on LinkedIn at www.linkedin.com/company/the-coca-cola-company.

About Coca-Cola China
Coca-Cola is one of the most well-known international brands in China. We have more than 15 brands and offer over 50 beverage choices to Chinese consumers, who enjoy 150 million servings across the country every single day. The Coca-Cola system is currently investing $4 billion in China for future growth from 2015 to 2017, building on $9 billion of investments made in the market since 1979. The Coca-Cola system today employs more than 45,000 people in China, 99% of whom are local hires. At the same time, Coca-Cola and its bottlers have been actively supporting educational and philanthropic causes, promoting environmental protection, and contributing to the development of local communities, with a total contribution of over RMB 270 million. Coca-Cola is also the only company that has sponsored the Special Olympics, Olympic Games, Paralympic Games, EXPO, Universiade and Youth Olympics in China. For more information, please visit www.coca-cola.com.cn or follow our corporate microblog at weibo.com/cokechina and our corporate WeChat account “Coca-Cola China".